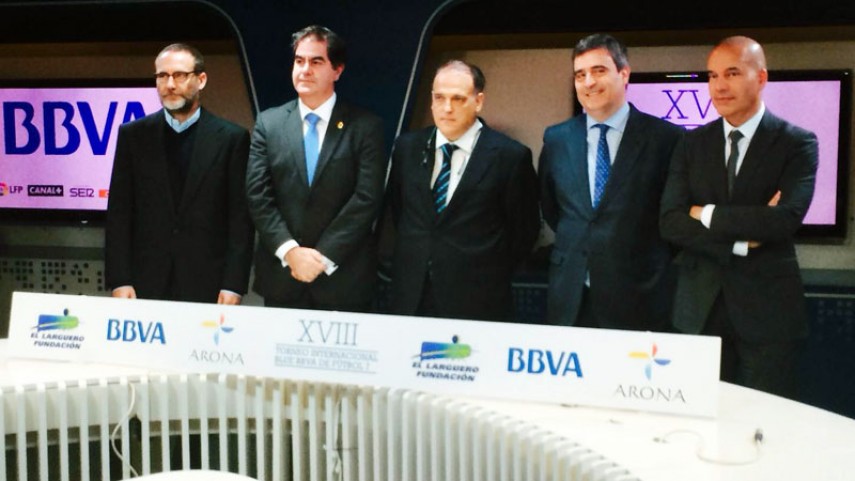 The LFP at the presentation of the Eighteenth BBVA Blue Tournament

The president of the Liga de Fútbol Profesional, Javier Tebas, showed his support for the international 7-a-side football tournament on Cadena SER.

The Liga de Fútbol Profesional, represented by its president, Javier Tebas, showed his support for youth football at the presentation of the eighteenth edition of the International BBVA Blue 7-a-side Football Tournament on Cadena SER.

Journalists José Ramón de La Morena, director and presenter of 'El Larguero', and Manu Carreño, director and presenter of 'Carrusel Deportivo', were the masters of ceremony for an event that was also attended by Miguel Cardenal, State Secretary for Sport; Francisco Miño, the mayor of Arona; Carlos Ricardo, BBVA's global director of marketing, sponsorship and advertising; and Alejandro Martínez Roig, general director of Canal + content.

"It gives us the chance to open up more to the public. Talking about this tournament gives people goose bumps. For us it is just as important as other official competition days. I have to thank the Fundación El Larguero for the work they do", said the president of the LFP.

For his part, Carlos Ricardo stated that the tournament "represents a dream to all the kids who wish to become athletes and aspire to play in the Liga BBVA". In addition, Miguel Cardenal and Francisco Miño wanted to extend their gratitude for the organisation of the event.