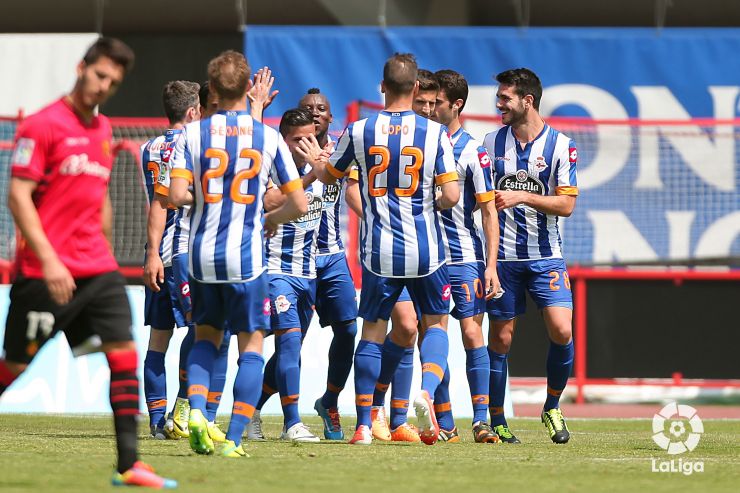 The league leader shows no mercy to Mallorca

Deportivo beat the Balearic outfit 0-3 and continues to hold a five-point advantage over Eibar, who lie second in the Liga Adelante.

Deportivo de La Coruña overcame Mallorca 0-3 to kick off proceedings in matchday 35 of the Liga Adelante. With this win, the Galician side consolidates its position at the top of the league and maintains a five-point lead over Eibar, the team's closest rival for the title. Meanwhile, the Balearic side currently sits in 15th place.

After a relatively even start, it was Mallorca who began to control possession of the ball and create the better of the chances in the first half. A superb volley by Álex Moreno flew over the bar and then an Emilio Nsue shot was kept out well by Germán Lux. However, the Galicians didn't give in and went into the break with a one-goal lead thanks to a penalty in the 41st minute, which Ibrahim Sissoko made no mistake with.

Deportivo came out all guns blazing for the second half and needed just two minutes to double their lead. Luisinho found Diego Ifrán in the 47th minute to make it 0-2 and sure things up for Fernando Vázquez's side. 20 minutes later Borja Bastón extended it to 0-3, a goal that came thanks in big part to a fantastic ball from Juan Carlos Real. There was some bad news for Deportivo though as Luisinho was stretchered off after twisting his left knee.