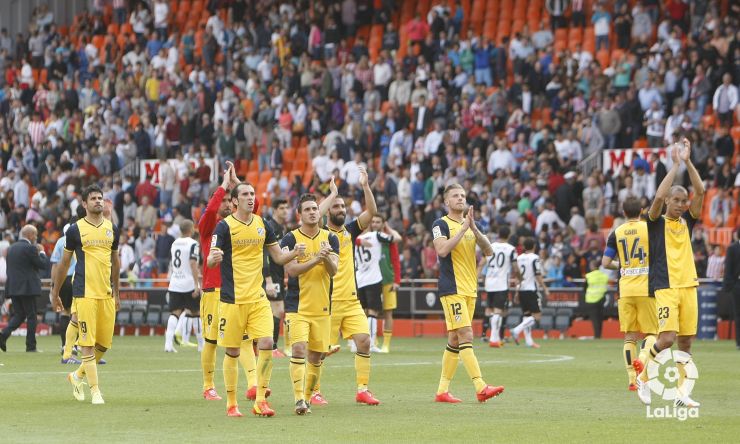 The leaders forge on in the Liga BBVA

Atlético made a giant leap on their way to the title after defeating Valencia while Athletic have virtually guaranteed their fourth place.

Sunday in the Liga BBVA provided some thrillers and threw up a few surprises too. Club Atlético de Madrid, the tournament leader, took a step closer to the title while FC Barcelona, Athletic Club and UD Almería recorded important wins.

The Mestalla hosted one of the most valuable matches. The championship leader was visiting Juan Antonio Pizzi’s Valencia in a thrilling clash in which the spoils went to the rojiblancos thanks to a goal from Raúl García. The result means that Atlético edge closer to their goal.

The San Mamés provided the scene for a clash for a European spot. Athletic, who were defending their fourth place, brushed Sevilla FC aside, winning 3-1 to practically guarantee their UEFA Champions League qualification. With a win next week, the Basque side would mathematically seal fourth place.

Elsewhere, Francisco Rodríguez’s Almería made their intentions of salvation clear with a 2-1 win over RCD Espanyol. Fran Vélez, who was making his Liga BBVA debut with the Andalusians, scored one of his team’s goals. To close out the day Barcelona beat Villarreal CF 3-2 in a thriller. The win keeps the azulgranas hot on the heels of the leader.