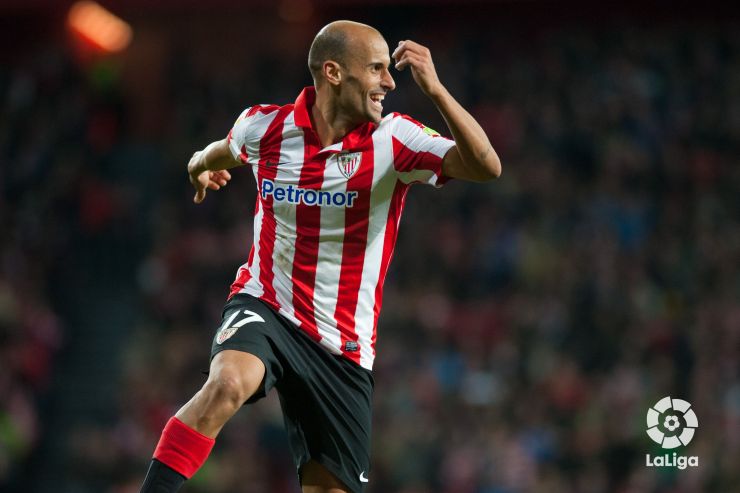 "The goal is fourth place"

Mikel Rico, for whom Friday's match against Granada will be a special occasion, discussed his first months at Athletic with LFP.es.

Athletic Club hosts Granada CF on Friday for matchday 25 of the Liga BBVA, and the Basque outfit will be trying to put the defeat at the hands of RCD Espanyol in the last match in La Catedral behind it. One player who has not forgotten his past is Mikel Rico (4/11/1984), for whom the clash with the nazaríes will have particular significance as the Basque midfielder spent three fruitful seasons in the Andalusian city.

LFP.es: Athletic are fourth in the Liga BBVA and have more points at this stage of the season than ever. Were you expecting to be so high up at the start of the year?
Mikel Rico: Maybe we weren't expecting to be so high up so soon. We knew we had a good squad and that we could put in a good season, but it was also a year of change, which is never easy. Now that we are there, we want to stay there. But we were not expecting to be so high up. When the team has been in fourth place for ten matches with thirteen left to play and you have a four point advantage, you have to make it your goal no matter what.

"When the team has been in fourth place for ten matches with thirteen left to play and you have a four point advantage, you have to make it your goal no matter what"

LFP.es: Who do you think are your main rivals for fourth place in the Liga BBVA?
Mikel Rico: Right now I think Villarreal and Real Sociedad are looking the most likely. But Valencia is going strong and Sevilla could get on a hot streak at any moment. They are all rivals, but we have to focus on picking up points and not looking at the rest.

LFP.es: You played in the San Mamés as a visitor, how does it feel to step out in La Catedral?
Mikel Rico: All the teammates I have had and who had been to the San Mamés told me that it was a special ground. And it is. You go into the dressing room after warming up and there's nobody there, then you come back out and the ground is full, it fills up in five minutes. It is a different stadium and it is great to play in.

LFP.es: And how does it feel playing there in an Athletic shirt?
Mikel Rico: Just imagine what it is like playing in the new stadium and being able to enjoy the San Mamés as a home player. Also there is a lot of excitement about the year we're having. Enjoying that every two weeks is amazing.

LFP.es: It is so special that the five goals you have scored so far in the Liga BBVA have come in the San Mamés… Does Ernesto Valverde ask you to go forward more at home?
Mikel Rico: No, it's my fault. At home you always want to win, you are a little more relaxed in the attack… on the road you want to sit back a little more, subconsciously. Valverde asks me to do it away too, it is something I hope to change.

LFP.es: How is Valverde as a manager?
Mikel Rico: He is a normal guy, something that's difficult to find today in football. He is a normal coach and a normal person. He is relaxed and he knows what he wants. He also knows how to get it across to his players, which is very important. He knows the team and we are very happy with him.

LFP.es: Is it important for Athletic's coach to be familiar with the idiosyncrasies of the club?
Mikel Rico: I think so, it is certainly a different club and it is important for the manager to be familiar with it, and if not, as soon as he arrives he really has to immerse himself in Athletic. Anyone who has come from the outside realises immediately that this is not just any other side.

It is an unusual club that trains nearly all the players it has, or practically all of them. When you go into the dressing room you see a different commitment to at other clubs, perhaps because we are all from here, because of the fans, because of the Lezama academy… It is difficult to explain, but the club is definitely different.

LFP.es: Granada are coming to the San Mamés. I imagine it will be a very special match for Mikel Rico…
Mikel Rico: Yes, because Granada is the team that gave me the opportunity to play in the Liga BBVA, that made me progress enormously as a player. I had three great years there and it will always be special to play against Granada, even more so while there are ex-teammates of mine in the squad.

LFP.es: When your signing by Athletic was announced, there was a lot of gratitude from Granada and all the fans were behind you, which is very unusual when a player leaves. What did you give the team in your three years there?

Mikel Rico: Hard work. The only thing I contributed was hard work and trying to be as professional as possible. I trained so hard and gave everything. The quality of my performances may have varied but I always gave everything in training and also in matches. The people there have a lot of affection and respect for me, as I do for them.