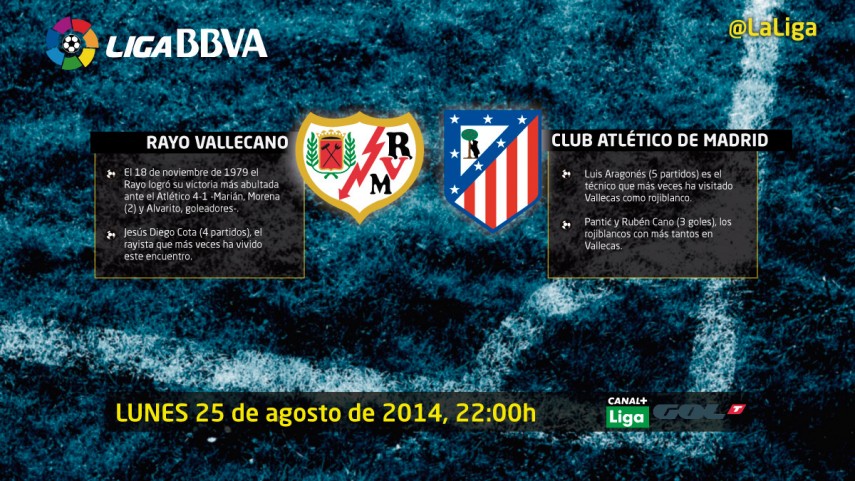 The Rojiblancos visit Rayo Vallecano in what will be their first match as champions of the 2013/14 Liga BBVA.

Club Atlético de Madrid, the winners of last year’s Liga BBVA, will start their title defence in a local derby against Rayo Vallecano. Diego Simeone’s men come into the match brimming with confidence after beating Real Madrid CF in the Supercup of Spain, and they are facing an exciting Vallecano side who are looking to keep their place in the topflight of Spanish football with a raft of new faces and the same brand of touch football they demonstrated last season.

Team news
Paco Jémez will be without the injured Antonio Amaya, Álex Moreno, who was hit by a bout of flu last week, and Léo Baptistão because of his contract. Simeone, for his part, will have to face the absence of Arda Turan, who is injured, and Raúl García, who is serving a suspension from last season.

What the managers have to say
"Desire, excitement, intensity and confidence in beating Atlético de Madrid", is Jémez’s recipe for success on Monday. "Atlético are very, very good in defence but we will try to use our strengths to beat them", concluded Rayo’s manager.
For his part, Simeone spoke of his absence from the bench, where he will be replaced by his assistant, Germán Burgos: "We will try to look for the best way to communicate with each other. He is able and confident and he gives me peace of mind because we see football in the same way". The Argentinian coach also confirmed that Miguel Ángel Moyà will start the game.