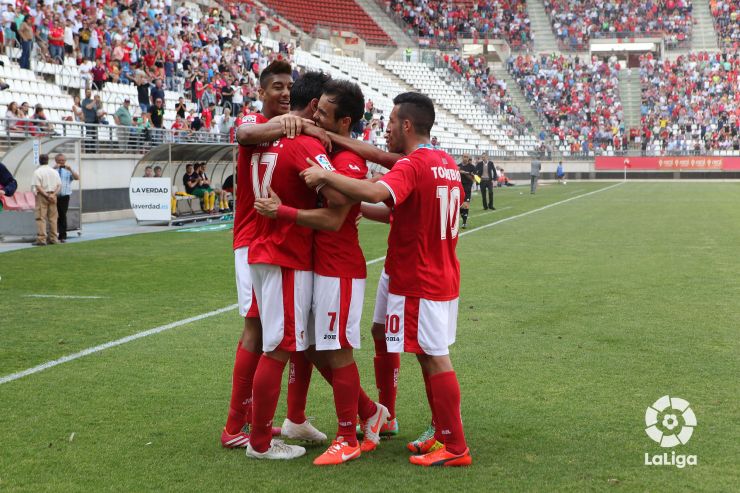 The fight for the Liga Adelante hots up

Draws for Deportivo and Eibar and victories for Las Palmas and Murcia throw the title race wide open, moving the Canary Islanders and granas closer to the top spot.

The Liga Adelante continues to be more exciting than ever with only four games to go until the end of the season. Draws and last-gasp winners featured heavily this weekend.

Girona FC and Real Madrid Castilla, two of the sides most in need of a win, played out a draw at the Estadio Municipal de Montilivi and remain in the drop zone. The same happened with CD Numancia and RCD Mallorca, who will have to wait to secure safety. SD Eibar and SD Ponferradina also missed the chance to make a statement with a 0-0 draw at Ipura.

Real Sporting de Gijón returned to winning ways at home on the new manager’s debut. The main surprise of the day was CE Sabadell’s defeat of FC Barcelona B, which moves them to within touching distance of the playoffs.

Saturday ended frenetically, with UD Las Palmas taking the spoils in the Canary Island derby against CD Tenerife, and Sunday started in similar fashion. Córdoba CF, who are looking to make a late push into the playoffs with a run of six games undefeated, lost thanks to a stunning comeback from Real Zaragoza. Roger Martí’s goal in extra time was enough for the visitors to down the Andalusian side, and move away from the foot of the table.

Sunday’s highlight was Real Murcia’s 5-0 thumping of CD Mirandés and a standout performance from Kike García, who found the net three times to join the Liga Adelante’s top goal-scorers with 21. The win means the granas have climbed to fourth position. RC Deportivo de La Coruña, for its part, is still looking down on the rest with 65 despite a one-all draw in the Mendizorroza against Deportivo Alavés.