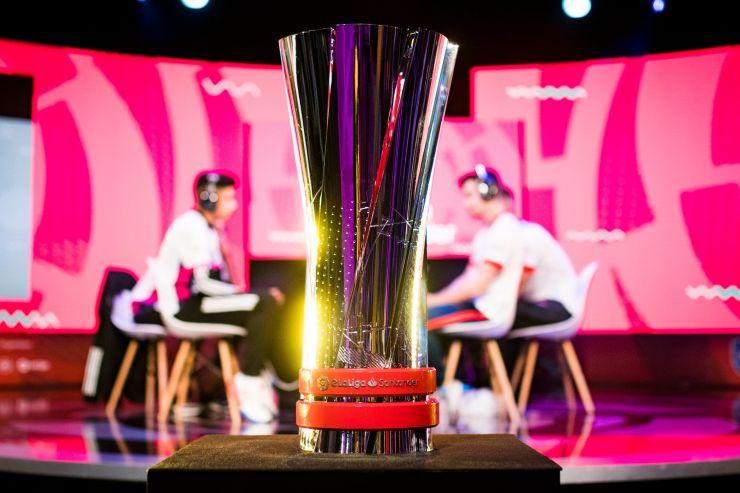 Face-to-face matches are back in the competition!

LaLiga and Electronic Arts announce the first details of eLaLiga Santander 2021/22, the only EA SPORTS FIFA 22 Global Series Official League Qualifier in Spain.  Featuring one of the highest EA SPORTS FIFA 22 Global Series total prize pools in the world at 300,000€, eLaLiga Santander 2021/22 will create stars on the virtual football pitch just like LaLiga does on the traditional one.

After the last season, marked by the restrictions resulting from the coronavirus pandemic, eLaLiga Santander returns stronger than ever, focusing on face-to-face competitions respecting all the appropriate security measures, travelling to new cities, and consolidating the stops for the eLaLiga Santander Cup or international competition.

What can’t be, can be

Two years ago, a player entered the competition on his own and surprised everyone by taking the cup home. The following year, that same player won the champion title again, it was not a coincidence. In eLaLiga Santander everything is possible, and this year it gives players from all over Spain the opportunity to represent one of the LaLiga Santander or LaLiga SmartBank clubs participating in the competition. Those interested can now register through the official website to participate in online tournaments in which you can accumulate points, which will last until the end of November. The tournaments will begin on the following dates: October 18 and 25, November 1, 8 and 15.

Witness the excitement of  eLaLiga Santander All Star

This Wednesday the 13th, the super event #eLaLigaSantanderAllStar will kick off the competition from 18:00 through the @eLaLiga Twitch channel. The event will feature the presence of professional players JRA, Chousita, Neat and Jrg15 voted for by the community, who will face unique challenges in a  team-based format with EA SPORTS FIFA 22 as the protagonist. Each team will be captained by an influencer, two of the most important in the Spanish-speaking FIFA competitive scene, DJMariio and Kolderiu, who will be joined by Spursito and Cacho. For fans it will be a night like no other from home. And this is just the beginning.

The regular season of eLaLiga Santander

In January and after the official presentation of the clubs and their players, the regular season will start, which will last 5 months full of emotion.

In total, the final ranking for the regular season will be determined by 180 home-away matches between eLaLiga Santander Clubs.

In April the regular competition will stop in order to allow the eLaLiga Santander Cup to kick off in a city unprecedented for the competition to date. In the tournament, which will see the 4 best-ranked clubs in each group to date face off, a prize pool of 50,000€ will be distributed, and the winning club will win its own title. It will be an unprecedented show to which the community will be able to attend in person to experience the emotion in person, and to participate in various activities, if sanitary conditions allow it.

After this break, the regular season will resume until May. At that time, we will meet the 16 highest ranked clubs, 8 from each group, who will compete in the Grand Final of eLaLiga Santander 2021/22, of which one club will rise as the champion of the season. Of a prize pool of € 250,000 that will be distributed among the 32 first classified, the champion will win € 60,000.

Closer than ever to the community

With the aim of surprising year after year, and of celebrating face-to-face events, strictly following the protocols set on each occasion, eLaLiga Santander returns this year getting closer than ever to the community: with a series of events held in various cities of Spain with public attendance, fun dynamics during the evenings and many surprises. This is in addition to enjoying and attending the biggest EA SPORTS FIFA 22 competition in Spain in person in unparalleled stages.

LaLiga and EA SPORTS, continuing with the commitment to expand the eLaLiga Santander program beyond our borders, this year will once again offer international fans the opportunity to participate in a competition created especially for them. More exciting news will be shared in November.

The competition evolves and adapts to new technological trends. For this reason, this year eLaLiga Santander will be played on PlayStation 5.

Daily monitoring of the competition through the official channels of eLaLiga

The day to day of the competition can be followed through the eLaLiga channels on Twitter, Instagram, YouTube, and Twitch, and also through the hashtag #eLaLigaSantander.