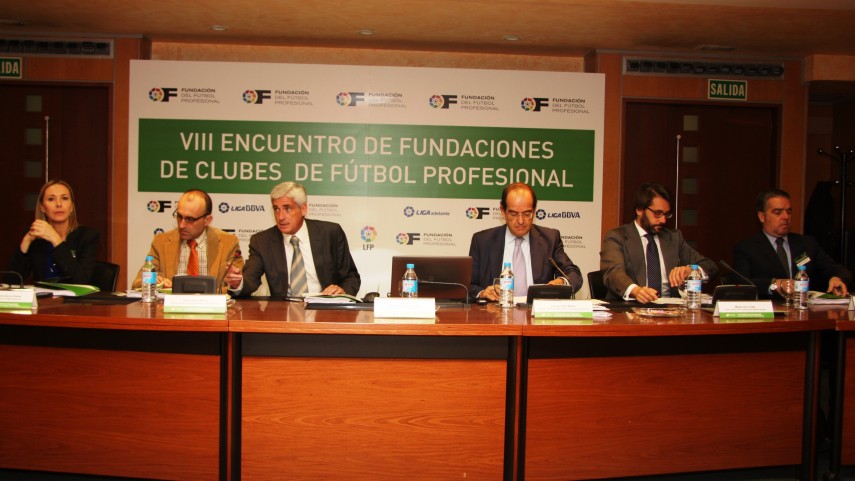 The Eighth Foundations Meeting gets underway

Throughout Wednesday, Liga BBVA and Liga Adelante teams are taking part in the annual meeting of Fundaciones de Fútbol organised by the Liga de Fútbol Profesional.

As it does every year, the Liga de Fútbol Profesional (LFP), together with its Foundation, is running the Professional Football Club Foundations Meeting. This eighth edition will be attended by practically all the representatives of the foundations of the Liga BBVA and Liga Adelante clubs.

Clemente Villaverde, vice president of the Liga de Fútbol Profesional, was responsible for opening the eighth edition of the Professional Football Club Foundations Meeting, which is organised by the Fundación del Fútbol Profesional and the LFP every year. "This gathering is necessary as a meeting point to lend more significance to the foundations within the activities of the clubs", said Clemente Villaverde.

The event, which is due to run all day, will include various presentations from professionals on Foundations. Thus, José Luis Piñar, a Professor of Administrative Law, will give the first talk on current issues and opinions on foundation reforms. He will be followed by several experts in sports law, who will explain a series of subjects of interest to the Foundations, such as working relationships, taxation, protection of minors, etc.

The goal of this meeting is to create a better understanding of the common issues and needs of football club foundations and to create better relationships between foundations.