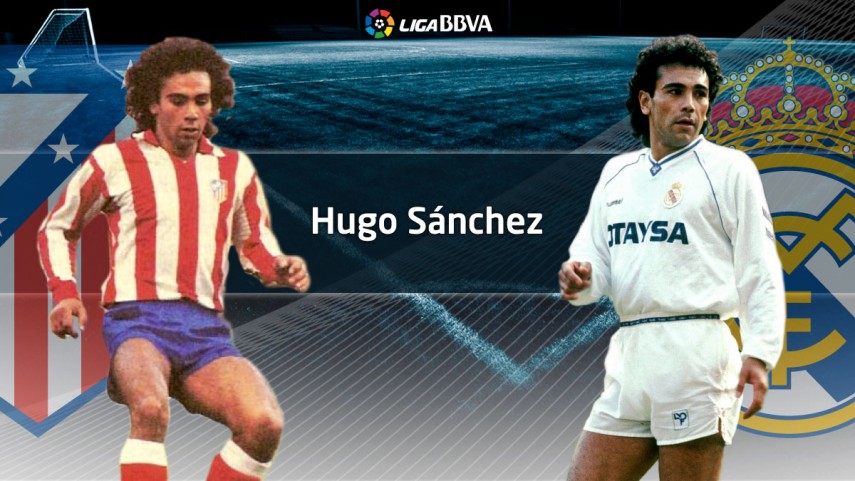 Hugo Sánchez scored in Madrid derbies for Atlético and Real. LFP.es talks to him about his thoughts on this Sunday’s exciting clash between the two sides.

Madrid derbies between Atlético Madrid and Real Madrid have always been emotional affairs and create a special kind of atmosphere in the Spanish capital. A few people have had the good fortune to play for both sides, and some have even managed to score for both teams in this most heated of footballing rivalries. That is the case for the current LFP ambassador Hugo Sánchez. The Mexican goal machine experienced the intensity of these duals between the Spanish capital’s two biggest teams at first hand and speaks with LFP.es about this weekend’s upcoming clash.

LFP.es: One of the most interesting derbies in recent years is nearly upon us, a match that could potentially decide the League. Which side do you think is in better shape heading into this game?

Hugo Sánchez: It is always an attractive fixture. Although one of the teams has experienced a slight drop in form ahead of this derby, it is always an attractive prospect because of the atmosphere it creates in the city, before and after the match. Bearing in mind that Real Madrid is in great form at the moment, the stage is set for Atlético Madrid to bounce back and re-establish themselves in the title race. But Real Madrid are playing really well, they are motivated and they gave an exhibition performance in their last match (against Schalke 04 in the UEFA Champions League), showing their power, effectiveness and ability to play good football.

LFP.es: The Whites won the last derby, a Copa del Rey clash that was played in the Calderón a few weeks ago, with relative ease. Can Ancelotti’s men put in a similar performance this time?

Hugo Sánchez: In the last few years Real Madrid has had a very favourable record in the derby games, and that Copa del Rey match was an example of Atlético Madrid not being able to find a way to break them down. I would imagine that Simeone is thinking about what tactics and strategy to use in order to catch Real Madrid off guard and ultimately win the game.

"Real Madrid will give this derby the respect it deserves, even more so given they are now alone at the top of the league"

LFP.es: It has been a long time since Atlético has been in contention for the title at this stage of the season. Do you think they are capable of going the whole way despite the fact they are up against two sides, in Real Madrid and Barcelona, that are more used to the pressure?

Hugo Sánchez: I think that because of ‘Cholo’ Simeone the Atlético Madrid players are mentally prepared and believe that they are capable of fighting for the Liga BBVA title this season. The determination and drive they have shown in many matches is testament to that.

LFP.es: Jesé Rodríguez and Koke are two young players that have been rocks for their teams this season. Do you think they will have an important role to play in this derby?

Hugo Sánchez: It’s always great to see young players but especially when they are home grown. In the case of these two, they are eager to show what they can do because they are playing for two huge teams and are considered future stars. They have a chance to shine in this match and to continue garnering attention.

LFP.es: Real Madrid’s greater depth of squad compared to Atlético’s has been widely talked about. Given that both sides are still in the UEFA Champions League, do you think this could favour the Whites?

Hugo Sánchez: It’s hard to say. If the Atlético players are physically prepared, then it shouldn’t affect them. There’s always a special kind of motivation that can overcome fatigue. But it is true that Real Madrid have more options than Atlético.

LFP.es: What line ups do you expect from both teams bearing in mind that Atlético are at home and trailing in the table, and that Real Madrid is the current league leader?

Hugo Sánchez: I can’t see the line ups changing too much for this match. Real Madrid will give this derby the respect it deserves, even more so given they are now alone at the top of the league. Because of that they won’t play a weakened side.

LFP.es: Which player do you think could be the difference in this derby?

Hugo Sánchez: Without a doubt for Real Madrid it is Cristiano Ronaldo. As well as being a devastating talent, he is also at the heart of a lot of goals for his team and makes things easier for his teammates. For Atlético, if Diego Costa is focused and plays his game he could be very important. But there are also other players full of confidence who could be decisive like Karim Benzema and Gareth Bale.

LFP.es: On a personal level, what memories do you have of the Madrid derby from your time playing for both of the Spanish capital’s major teams?

Hugo Sánchez: This match will be in the Vicente Calderón, and I have a few anecdotes from there. I remember my first penalty in a derby, which I scored for Atlético. I celebrated it like a very special goal because it was then that I really understood the importance of these matches. I also remember scoring a diving header for Real Madrid, pouncing on an error between the Atlético keeper and a defender. That was also a very special goal.