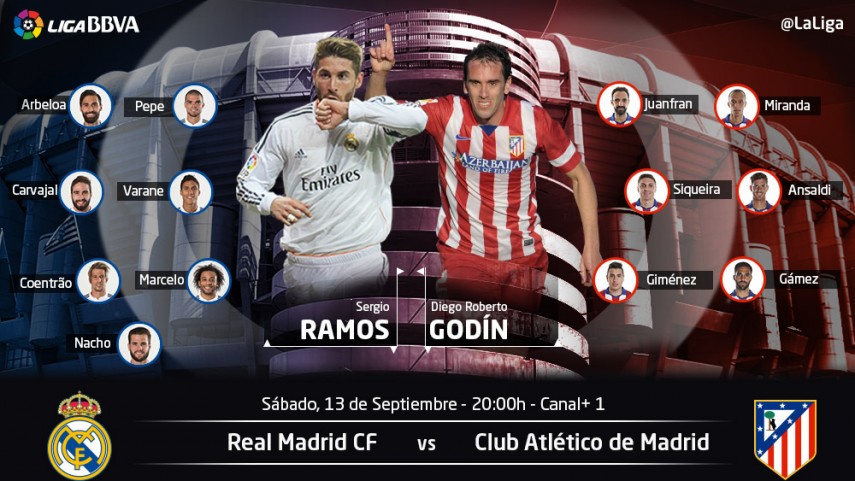 The derby, from line to line: the defence

Get to know the stats behind those charged with defending Real Madrid and Atlético's back lines.

In a high-voltage game like the derby between Real Madrid and Atlético Madrid, the defence’s role is fundamental. More so when the forwards running at them include Karim Benzema, Cristiano Ronaldo, Antoine Griezmann, and Mario Mandžukić... Concentration, experience and ability to stay calm will all be important come Saturday.

Carlo Ancelotti's pairing in the first two games of the season was Pepe and Sergio Ramos, who played together for the majority of last term. Between them they have played more than 32,000 minutes on the pitch with Madrid, a number that gives you an idea of the experience they have.

Marcelo, who has played over 200 times in Liga BBVA, and Dani Carvajal, with 32, make up the Whites’ back line. Carlo Ancelotti has shown in his last few games that they are his go-to full backs, partly because of their attacking instincts. They share a position with Fábio  Coentrão and Álvaro Arbeloa, who have amassed a number of appearances for Madrid over the past few seasons, and who also helped the side to concede only 38 goals as opposed to the 104 that they scored.

Guilherme Siquiera is the principal new face in a defence that shipped only 26 goals last campaign, and was the tightest in Liga BBVA. The full back brings pace and cunning to a back four that his marshalled by Diego Godín and João Miranda, two centre backs who have improved a lot under the stewardship of Diego Pablo Simeone.

Spain international Juanfran Torres, who has played 113 times for Los Rojiblancos completes the line up. As alternatives out wide they have new boys Cristian Ansaldi and Jesús Gámez, while Uruguayan José Giménez provides cover in the middle

Both back lines are more than capable of making a mark at the other end. Both Sergio Ramos and Diego Godín have become safe bets in front of the opposition goalkeeper.

The Seville-born centre back has scored 38 times for the Whites in the league, which is made all the more impressive given his age. His power in the jump and heading ability means that he is a true danger.

Diego Godín is not far behind, scoring important goals in the 2013/14 season, including in games against UD Levante, Real Valladolid CF, Getafe CF and FC Barcelona, in the game that saw Atleti win Liga BBVA last term.