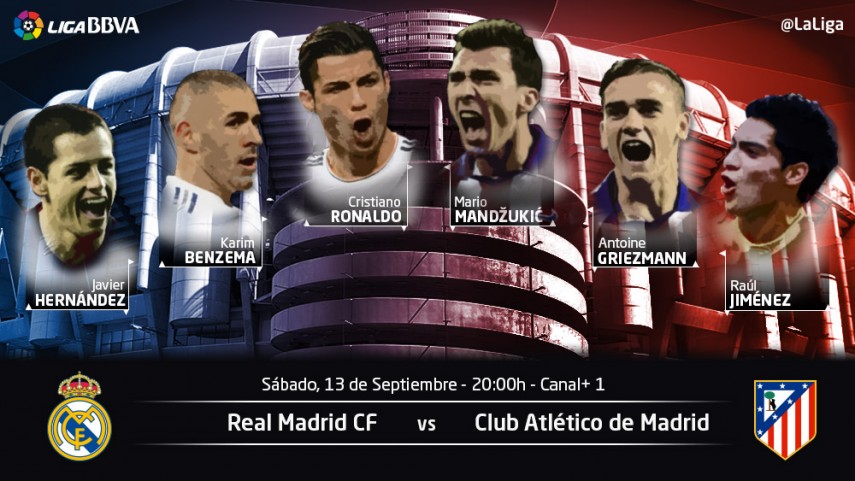 The derby, from line to line: the attack

The firepower of the strikers will decide the derby between Real Madrid and Atlético. Find out all the stats on the marksmen who will set the Liga BBVA alight.

Goals, goals and more goals. That is what the footballing world expects from this Saturday’s derby at the Santiago Bernabéu between Real Madrid CF and Club Atlético de Madrid. If there is one area of the field that will be pivotal to the game it will be up front. An area where the stars of the game will bring excitement and make the Liga BBVA come alive for another matchday.

Carlo Ancelotti’s strikers have a total of 629 goals in all competitions at all clubs. While Javier ‘Chicharito’ Hernández scored 59 goals during his spell at Manchester United and Karim Benzema has celebrated 113 goals just wearing the white shirt, it is Cristiano Ronaldo who steals the limelight. The Portuguese star has scored 372 goals, of which he has celebrated 255 with Real Madrid, 178 of them in the Liga BBVA.

Last season Cristiano Ronaldo became the top scorer in the 2013/14 championship with the 31 goals that he scored, accounting for 29.8 percent of the Whites’ goals in the championship. Proof of the Portuguese player’s firepower and clear evidence that he is a leader on and off the field.

The challenge for the Rojiblanco attack

It will not be an easy task to replace an attack that scored 41 goals in 38 matchdays last season and took Atlético to the top of the Liga BBVA to lift their first title in 18 years, but Mario Mandžukić, Antoine Griezmann and Raúl Jiménez are determined to do so. Or at least, to strive to score and keep the fans smiling in the wake of Diego Costa’s record last season of 27 goals, making him the third highest scorer in the 2013/14 championship, David Villa’s experience and the freshness of Adrián López.

Diego Pablo Simeone’s three new ‘killers’ possess fighting spirit and the skills needed to make opposing defences tremble, and, in this case, earn a good result against Real Madrid, who they defeated just three weeks ago in the Supercopa de España.

Mario Mandžukić already knows what it means to be decisive for Atlético. The striker, who bagged 56 goals in his previous spell in the German Bundesliga, opened his account in the Liga BBVA with a goal against SD Eibar in the second game of the season. He will also hope to forge the perfect partnership with his two other team-mates.

The first of them, the Frenchman Griezmann, is an old hand in the Liga BBVA, in which he has celebrated 40 goals and 16 goal-scoring passes. But that was wearing the colours of Real Sociedad, where he arrived from this summer to strengthen the most important line for the Rojiblancos.

The last player to join the party was Raúl Jiménez, a young forward who dazzled for his previous team, CF América. There, with his nose for goal and cunning, he scored 26 goals, and he will be setting his targets even higher during his time at Atlético. For the time being, the Mexican has played his part in the first two games of the championship and has the most important thing: his manager’s confidence.