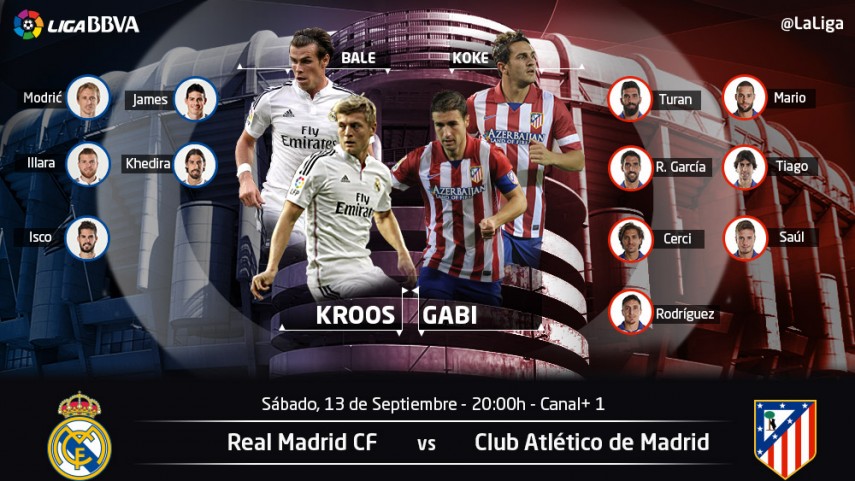 The derby, from line to line: midfielders

Real Madrid and Atletico's midfields are two of the strongest in Europe. The arrivals of James and Kroos are new for the Whites this year.

Real Madrid CF and Club Atlético de Madrid are to meet for the third time in the 2014/15 season. The two previous meetings came in the Supercopa, which the Rojiblancos ended up winning 2-1 on aggregate. Both sides boast some of the world's best midfielders: Koke, Raúl García, Gabi, Kroos, James Rodríguez and Luka Modric are those charged with giving both balance and electricity in the middle of the pitch.

Kings of the final ball

One of the features Diego Simeone has brought to the Calderón is the dead ball. Koke is the king of set piece delivery, and was the leading assist provider in Liga BBVA during the 2013/14 season. In the two Liga BBVA games thus far, the Rojiblancos academy graduate has a pass completion rate of 67.8%, with 61 of his 90 reaching their target.

Koke represents what Atlético’s strategy is all about

If Koke is the main man for Atleti, Toni Kroos and Modric are Real Madrid's chiefs, even more so following the departure of Xabi Alonso from the Santiago Bernabéu. The German has taken to Carlo Ancelotti's tactics like a duck to water. In two games he has shown his precision with the ball, accumulating an 88.6% completion rate. He has also laid on two goals in two games, and is always a danger.

Equilibrium, vital for both sides

Gabi is Gabi's central midfield muse. The skipper helps form the spine of the side. Always accompanied by Tiago or Mario Suárez, Gabi tackles, distributes and orders from the centre circle. He is so important that he has missed only two Liga BBVA games over the last season. His eight Liga BBVA assists last campaign showed he is just as important in attack as in defence.

Luka Modrić fulfils this role in a white shirt. Since his arrival under José Mourinho, the Croatia international has become a secret weapon in the side’s tactics. He is a complete central midfielder who can arrive late in the box, score goals or help out with the defensive work with his pace. This is his third season in the Spanish capital and he has played a total of 68 games in Liga BBVA.

He is a complete central midfielder who can arrive late in the box, score goals or help out with the defensive work

Alessio Cerci and James Rodríguez represent the new blood at Atlético and Real. Big signings that bring dynamism, a god first touch and a love for football to their sides. The Italian will want to win what is his first Madrid derby, while the Colombian, who scored against the visitors in the Supercopa, will want to show his quality after signing following his impressive performances at the World Cup in Brazil.