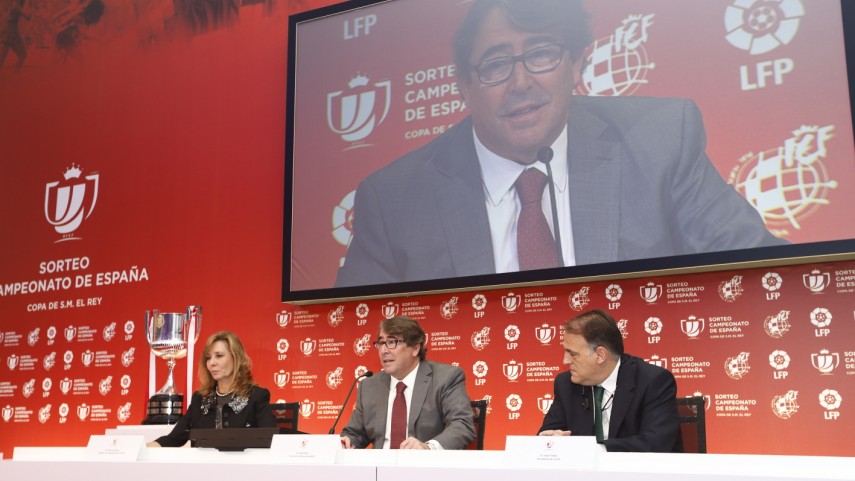 The Copa del Rey, ready to get going

Javier Tebas affirmed during the draw that "the Copa is a marvellous tournament that deserves everything".

The reactions to the draw for the Copa S.M el Rey haven't been long in coming. The ties between Liga BBVA and Ligas Adelante and Segunda B sides create the magic of the cup every year. This is how Javier Tebas, president of the Liga de Fútbol Profesional put it, "it's a marvellous tournament, it deserves everything, and from the LFP's perspective we're going to treat it with the respect it deserves".

One of the side's happiest with the draw was CD Olímpic de Xàtiva. Their president, Alfonso Ruwit couldn't contain his enthusiasm when he saw their name drawn against Real Madrid CF. "We are a modest side, with 81 years of history, and this kind of thing only happens once in a lifetime", said the Valencia side's president. "We're in dreamland with this draw", he added. Miguel Pardeza, the Madrid side's sporting director affirmed that they will affront the match "with the maximum responsibility, as we are obliged to, and respect Xàtiva, no match will be easy if we want to reach the final".

Another of the clubs who were happy with the draw was FC Cartagena. Their chief, Cristina Bustillo, explained that their match against FC Barcelona "will help us a lot, even though we're a well ran club, it's evident that it will help us". Bustillo also showed confidence, adding "hopefully we will be the first side who defeat Barça this season". Pere Gratacós, Barcelona's sporting director, also seemed satisfied with the draw: "We're happy because the first match will be a nice away trip, played at a good stadium and I think that we can go far in the competition after the first elimination match".