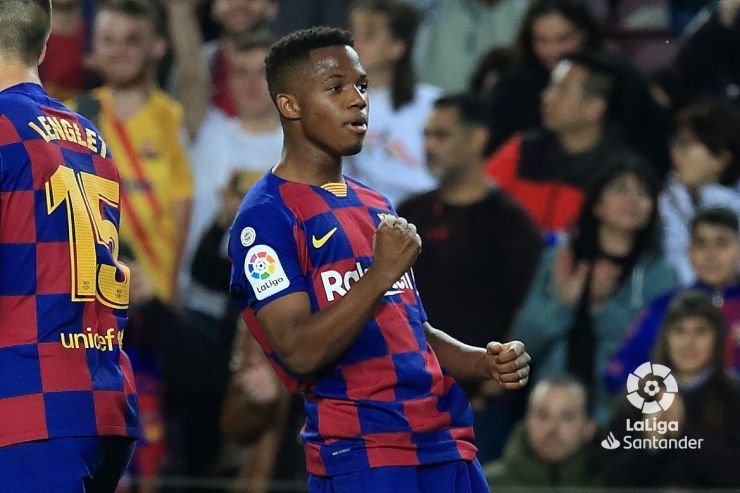 Ansu Fati, Ferran Torres, Martin Odegaard... Youth, talent and maturity on the field of play are the qualities which the brightest young gems of LaLiga Santander have shown this season.

Youth is the greatest of treasures, so they say. And they’re not wrong. Just ask the teams of LaLiga Santander, in which players of barely 20 years of age have shone bright this season. Talent, quality, and maturity beyond their years are some of the fundamental qualities of the competition's young stars.

As revelations go, no-one fits the bill better than Ansu Fati. The young gem aged just 17 has broken into Spanish football in style. His sheer gall out on the pitch, his character, ambition and his superlative quality, along with the wavelength he shares with players like Messi have been instrumental to his standing out as one of FC Barcelona's top players. Add to that his scintillating numbers: he has played over 1,000 minutes, netting seven goals and one assist in 24 appearances, starting in 11 of them.

He is not, however, the only youngster to stand out at the Catalan club. Riqui Puig has also sparkled in the LaLiga Santander run-in. Quique Setien placed his trust in him after the lockdown and he has carved out a place for himself in the starting XI. With a return of two assists in 11 games, it looks like he will be one of the first names on the team sheet in the future.

Barça are not the only side to have seen their youngsters take the step up. Valencia's Ferran Torres is another who has dazzled us. The speed and vision of the fledgeling winger have made him one of the best players in the squad this season. Four goals and five assists are a testament to the great year that he has had.

Not far away from Valencia, at Villarreal, there is another standout performer. Samu Chukwueze, the 21-year-old winger has played a key role for the Castellon-based outfit. His power, character and ambition have made him a veritable nightmare for his opponents, with five assists and three goals.

In San Sebastian, they are adept at squeezing the best out of their players, and examples include Alexander Isak, Mikel Oyazabal, Adnan Januzaj and Martin Odegaard. The Norwegian player has been quite the sensation in LaLiga Santander. At the tender age of 21, his maturity out on the field of play has surprised all of the fans. A lynchpin in the midfield, his commitment and talent have had quite the impact.

Two young stars have made the grade at Real Madrid: Vinicius Jr and Rodrygo Goes. The two Brazilians have dazzled Zinedine Zidane and the Real Madrid faithful. With over 1,000 minutes played apiece, slowly but surely they have been forcing their way into the French manager's side. And let us not forget the crucial goals which they have scored, including Vinicius's strike against Barcelona.