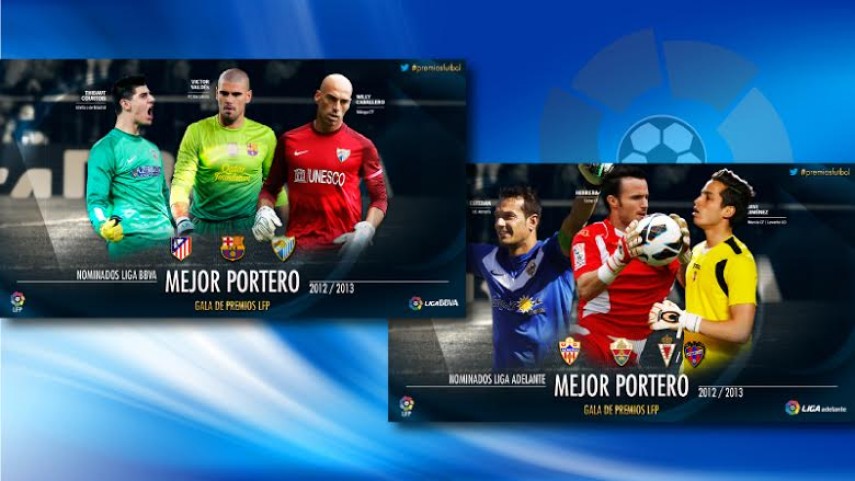 The best keepers in the LFP Awards

Courtois, Valdés and Willy Caballero in the Liga BBVA, and Esteban, Manu Herrera and Javi Jiménez in the Liga Adelante will be hoping for the gong.

Nominees for the Fifth Liga de Fútbol Profesional Awards Gala will include the best goalkeepers in Spanish football, both from the Liga BBVA and the Liga Adelante. Established keepers and those who have recently joined the elite will be looking to take home a prize whose winner will be announced on Monday the 2nd of December.

Thibaut Courtois, Víctor Valdés and Willy Caballero are the three who have been chosen to fight it out for the prestigious Liga BBVA award. They are three very different keepers who stood out at their respective teams throughout the year of competition thanks to their unequalled shot-stopping and calm under pressure.

All three of them seem deserving of the award: the young Courtois was the keeper to concede the fewest goals last season between the sticks of Club Atlético de Madrid; Valdés' spectacular form helped FC Barcelona on their way to winning last year's Liga BBVA; and Willy was one of the stand-out players in Málaga's surprising and historical season.

The same can be said of the three pretenders to the Liga Adelante throne, Esteban, Manu Herrera and Javi Jiménez, who stood out as heroes at their respective teams at various times during last year's Liga Adelante season.

Esteban is a household name in Spanish football and his latest achievement came last season, when he led UD Almería to a treasured promotion. The same can be said of Manu Herrera, who plies his trade between the posts of the brilliant and surprising Elche CF, and of Javi Jiménez, whose great year in the ranks of Real Murcia CF earned him a rise to the Spanish top flight through his signing to Levante UD.