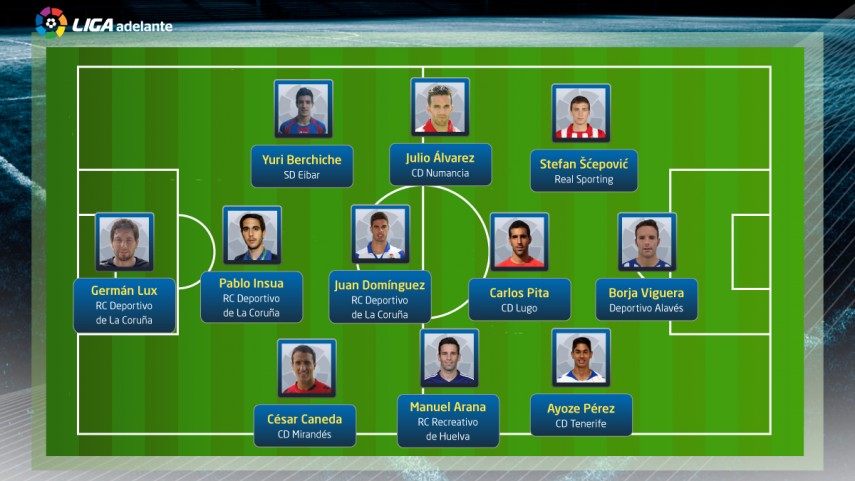 The best from the first half

The editorial team at LFP.es have chosen the eleven-standout players from the first half of the season in Liga Adelante.

The halfway point in Liga Adelante has arrived, and the editorial team at LFP.es have drafted together a team of the standout players from the first 21 games. It goes without saying that many excellent players have missed out, given that only 11 could be selected.

The position of goalkeeper is occupied by the stopper who has conceded the least goals in the competition so far, Germán Lux. The RC Deportivo de La Coruña man has only been beaten 14 times up until now. In a back three, his teammate Pablo Insua is joined by SD Eibar fullback Yuri Berchiche, and César Caneda of CD Mirandés. All three are key contributors to the good form of their respective sides.

The league leaders also have a representative in the centre of midfield. Juan Domínguez has played 20 times from the start, scoring twice, and has a pass completion rate of almost 86%. Manuel Arana, scorer of eight goals for RC Recreativo de Huelva, was another player who had to be included in the XI. Veteran Julio Álvarez of CD Numancia, and Lugo’s sole representative Carlos Pita complete the midfield quartet.

Up top it goes without saying that the two leading scorers in Liga Adelante are present. Real Sporting’s Serbian international Stefan Šćepović, who tops the scoring charts with 15 goals in 19 starts, and Borja Viguera, of Deportivo Alavés, who has scored 13 times this season, make up two thirds of a forward line that is completed by CD Tenerife youth product Ayoze Pérez, who is one of the real breakthrough players of the season.

As always when picking these XIs, many players who might have been picked miss out. Roberto Canella, Gerard Moreno, Jona Mejía and Felipe Sanchón were very close to getting selected, and are sure to carry on delighting one and all with their performances in an exciting Liga Adelante.