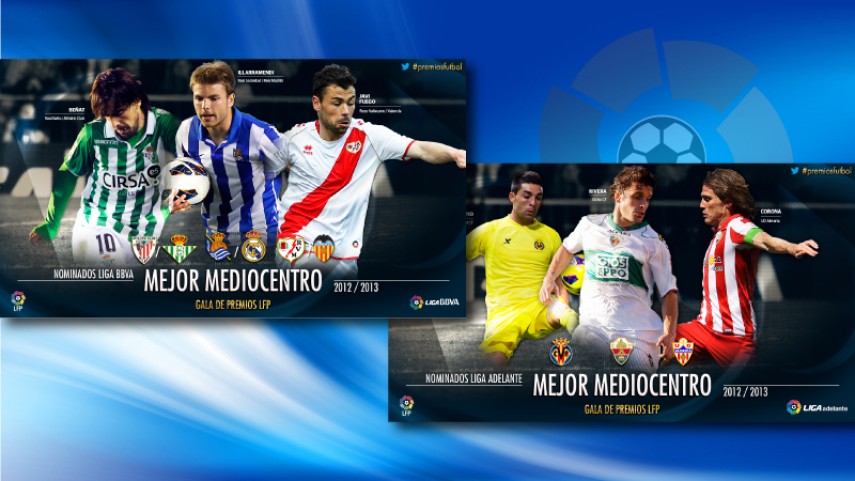 The best central midfielder in the LFP Awards

Illarramendi, Beñat and Javi Fuego from Liga BBVA, and Bruno Soriano, Alberto Rivera and Corona from Liga Adelante, are nominated for the awards.

The 5th Gala of the Liga de Fútbol Profesional Awards will also honour the best central midfielders from Liga BBVA and Liga Adelante from the 2012/13 season. The nominees, kings of the centre in their club sides, will find out who the winners are on Monday the 2nd of December.

Asier Illarramendi, Beñat Etxebarria and Javi Fuego are the nominees for the Liga BBVA prize. Following their exertions last season, they all moved on to new clubs this seasons in search of new horizons. Illarramendi is the most obvious example, leaving Real Sociedad de Fútbol to join Real Madrid CF. Beñat has returned to Athletic Club following his spell at Real Betis Balompié, whilst Javi Fuego swapped Rayo Vallecano for Valencia CF in the summer. The three all had a brilliant campaign in 2012/13.

This is in contrast to the Liga Adelante nominees, where Bruno Soriano of Villarreal CF, Alberto Rivera from Elche CF, and UD Almería’s Miguel Ángel García ‘Corona’ UD Almería are fighting it out for the prize. All three have carried on at the heart of their side’s play, following their promotions to the top level of Spanish football, showing the quality of the Spanish central midfield, which is all about technique with the ball at your feet, and hard work in defence.