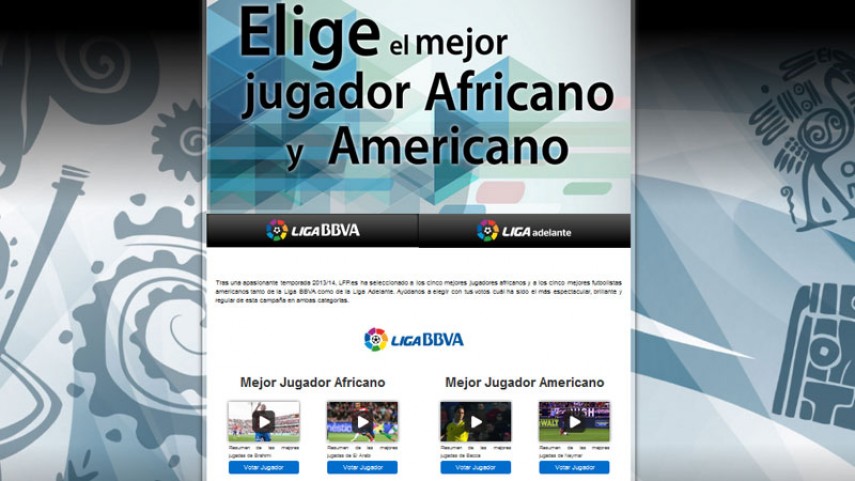 LFP.es users can now select their candidates, who will pick up their gongs at the LFP Awards Ceremony, as from Wednesday 20 August.

After a passionate 2013/14 season, LFP.es has chosen the five best African and five best American players in the Liga BBVA and Liga Adelante last year.

LFP.es will be able to select their favourite nominees by means of a vote, in both groups and divisions, starting on Wednesday 20 August. You will be able to choose your favourite goal very easily: go to the 'Best African and American player in La Liga' section and, after selecting a video and watching it to the end, you will have the chance to vote. The winners will pick up their gongs at the LFP Award Ceremony on 27 October.

In the Liga BBVA, the candidates for the best African player of the 2013/14 season are the Nigerian Ikechukwu Uche (Villarreal CF), the Algerian Yacine Brahimi (Granada CF), the Moroccan Youssef El Arabi (Granada CF), the Cameroonian Stéphane Mbia and the Malian Seydou Keita (Valencia CF). The Villarreal striker, with 14 goals to his name, was one of the stars in a Yellow team that finished seventh in the table. Goals, pace and spectacle were also provided by the Granada winger and forward, while the final two provided solidity and effectiveness in defence in the centre of the pitch for Sevilla and Valencia, respectively.

In the Liga Adelante, the candidates for the best African player are the Cameroonian Frank Bagnack and Jean Marie Dongou (FC Barcelona B), the Nigerian Macauley Chrisantus (UD Las Palmas), the Congolese Ritchie Kitoko (Real Jaén CF) and the Ivory Coastians Ibrahim Sissoko (RC Deportivo de La Coruña). The first two were two of the Azulgrana reserves’ standout players as the team finished third. For their part, the Las Palmas striker scored eight goals, the Jaén player was one of the best full-backs in the competition and the Deportivo footballer contributed pace and skill to the Galician club’s glorious promotion.

For their part, the candidates for the best American player in the Liga BBVA are Colombians Carlos Bacca (Sevilla FC), the Brazilian Neymar (FC Barcelona), the Costa Rican Keylor Navas (Levante UD), the Argentinian Ángel Di María (Real Madrid CF) and the Uruguayan Diego Godín (Club Atlético de Madrid). In his first campaign in the competition, the Sevilla striker and the Azulgrana winger were outstanding with 14 and nine goals, and were the stars of their respective teams. The Costa Rican keeper was one of the best shot-stoppers of the season, the skilful Whites forward provided 17 assists and the Rojiblanco centre-half was a stalwart in defence and contributed four goals to Atlético’s Liga BBVA win.

Finally, Argentinians Mariano Barbosa (UD Las Palmas), Germán Lux (RC Deportivo de La Coruña) and Mauro dos Santos (Real Murcia CF), the Brazilian Yuri de Souza (SD Ponferradina) and the Mexican Ulises Dávila (Córdoba) are in the race to be the best American player in the Liga Adelante. The Las Palmas and Deportivo keepers dazzled all season with their reflexes, the Murcia defender was one of his teams standout players, the Ponferradina striker found the net 12 times and the Córdoba forward scored the goal that took the Blanquiverdes to the Liga BBVA.