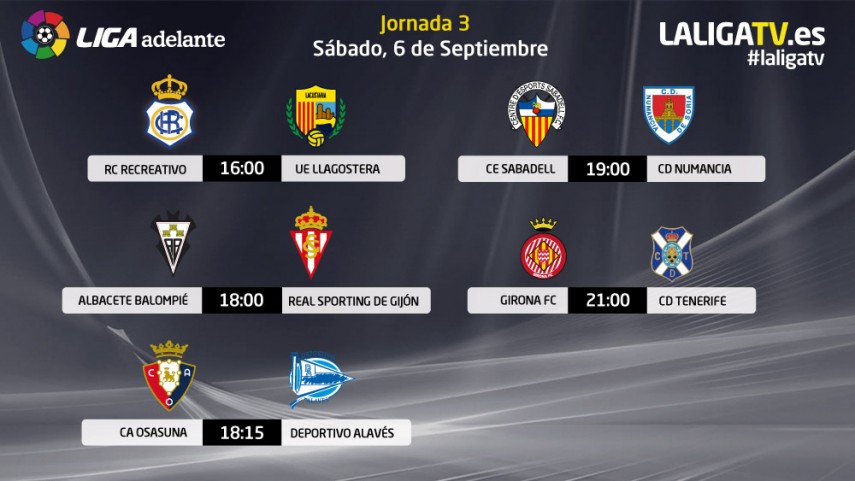 The ball keeps rolling in the Liga Adelante

The low-down on the five exciting matches that will open matchday 3 of the championship.

An unprecedented clash between Huelva and the Catalan side. While Recreativo have only been able to claim two points in their first two encounters, Llagostera go into the game in high spirits after achieving their first ever victory in the Liga Adelante (2-0 against CD Leganés).

Recre, Alavés, Sabadell, Albacete, Numancia and Tenerife are eager to claim their first victories of the season

"Llagostera is a team with the hopes of a newly promoted side, with a lot of desire. They are difficult to beat", said the home team's manager, José Luis Oltra. The visiting manager, Santi Castillejo, appeared hopeful after earning his first three points of the season: "We're looking at everything with much more optimism and now we believe in what we’re doing. A victory breathes life into everything and in oneself".

Victory has eluded Albacete until now, with one defeat and a draw in their first two fixtures. Their opponents, Sporting, on the other hand, are unbeaten and aiming to end the matchday at the top of the table.

Eight years on, Deportivo Alavés return to El Sadar to face CA Osasuna. Neither team has known defeat so far this season: the Navarrese side have four points and the Vitoria team have two, and they will look to position themselves at the top of the table.

The Alavés manager has described the clash as a tough on due to his difficult opponents: "It's a tough game because it's a powerful opponent; it’s a test to see where we're at. It will be very hard-fought, the most accurate team in the box will be the one that succeeds".

A turning point for Sabadell and Numancia. The Arlequinados have not won yet this season and the Rojillos need the three points to climb the table as soon as possible. Rivalry and excitment are therefore guaranteed this matchday at the Nova Creu Alta.

Manager Miquel Olmo, who will be without Raúl Tamudo through injury, has no intention of making wholesale changes to the starting eleven despite their poor start to the season: "It's a time for continuity; I'm certain the wins will come. The team doesn't deserve to be on zero points". Numancia recoup Juanma Marrero and Iñigo Pérez and add Braian Rodríguez to the matchday squad, on loan from Real Betis Balompié.

Montilivi will welcome the Canary Island side in a thrilling clash in which the two teams will look for victory. Girona will aim to remain at the top of the division, alongside Betis and Sporting, while Tenerife, with a single point in the bag, will hope to build momentum with a good result.