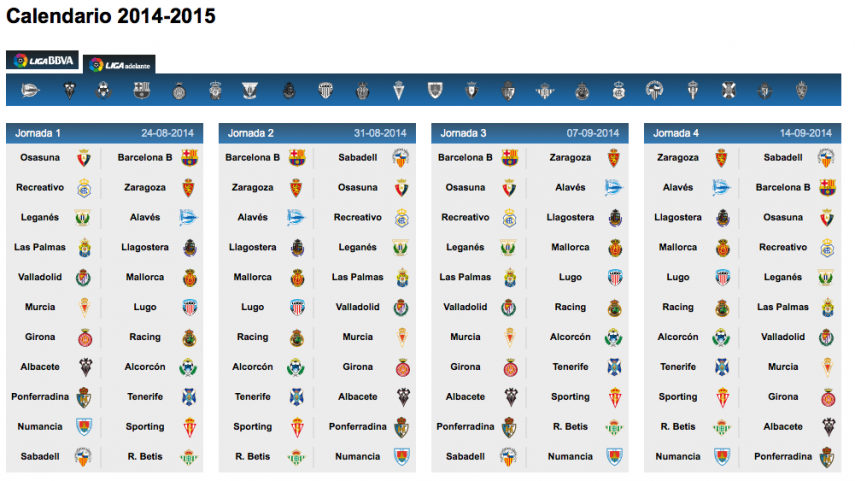 Read all about the 42 matches that will be played in the competition.

The 2013/14 Liga Adelante campaign was an emotional one, with equality being the principle protagonist right up until the final game, making the league one of Europe’s best.

Four new sides are making their debuts in Liga Adelante this year: CD Leganés, Real Racing Club, UE Llagostera and Albacete Balompié. The excitement and ambition of the recent arrivals will contrast the experience of first matchday opponents Deportivo Alavés, in the case of the Madrid side, Girona FC for the Cantabrians, Las Palmas will play Llagostera, whilst Albacete AD take on Alcorcón.

All of the sides will have certain games marked with an X on the calendar. In the case of CD Tenerife it will be when they host Las Palmas at the Estadio Heliodoro Rodríguez López in the Canary Island derby. This will make for a passionate matchday six, with another special tie in the Community of Madrid also taking place that day. Alcorcón and Leganés will battle it out at Santo Domingo for three very important points in addition to local pride.

The last game of the season sees two traditional teams in Betis and Sporting play at the Estadio Benito Villamarín, whilst new boys Albacete face old-timers Racing de Santander.
10 months of fighting and effort will reward the top two sides with an automatic place in the elite of Spanish football, whilst a third spot will be up for grabs in the Liga BBVA playoffs.