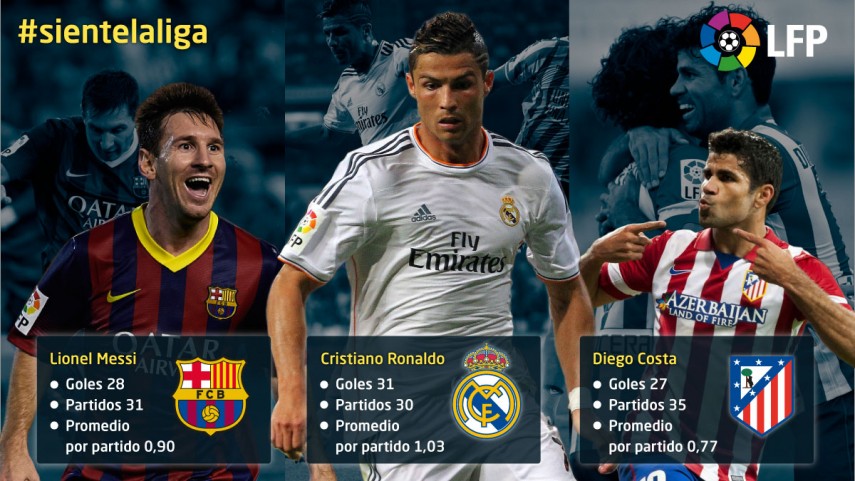 Cristiano Ronaldo, with more than one goal per game, has found the net more than any other player. He is closely followed by Messi and Diego Costa.

Cristiano Ronaldo, Leo Messi and Diego Costa; three players synonymous with goals, danger and success, three players whose eye for goal and pinpoint shooting have put them at the top of this year’s Liga BBVA table of goal scorers.

Cristiano Ronaldo: power and perseverance
The pace and drive to excel that characterise Real Madrid CF’s striker on and off the pitch have given him an average of more than one goal per match, specifically, 31 in 30 games. A feat few players ever achieve.

The only player who managed to equal his haul is Liverpool FC forward Luis Suárez, who, like the Portuguese, found the net 31 times, but he needed more matches to do so. In addition, Ronaldo is the Liga BBVA player who had the most shots in the 2013/14 season with 216, and the only man to have scored thirty goals or more in five different seasons.

Leo Messi: between history and legend
He is enrolled in a battle with his rival to be the best attacker of all time. Leo Messi finished the season with 28 goals, and even though it wasn’t his best season, he still managed to break records: he is the foreign player with the most appearances for FC Barcelona, and is the club’s top scorer of all time with 354.

Diego Costa: the most uncomfortable of opponent
Just one goal behind is Diego Costa. One of the most fashionable strikers around, he has lead from the front as Club Atlético de Madrid have shown both competitiveness and strength this season, winning Liga BBVA in the process.

His presence alone is enough to make life difficult for rival defences, and such is his versatility, he has only failed to find the net against three sides: Barcelona, Villarreal CF and Málaga CF.

The up and coming forwards
In the scoring charts we cannot forget the likes of Aritz Aduriz (Athletic Club), who was the highest-scoring player in the league to be born in Spain, with 16. Antoine Griezmann and Carlos Vela, who both have the same number, have together netted more than half of Real Sociedad de Fútbol’s goals this season, whilst Kevin Gameiro and Carlos Bacca of Sevilla FC have 15 and 14 respectively, lighting up Europe whilst promising more for next season. With these kind of numbers, the spectacle in the world’s best league is assured.