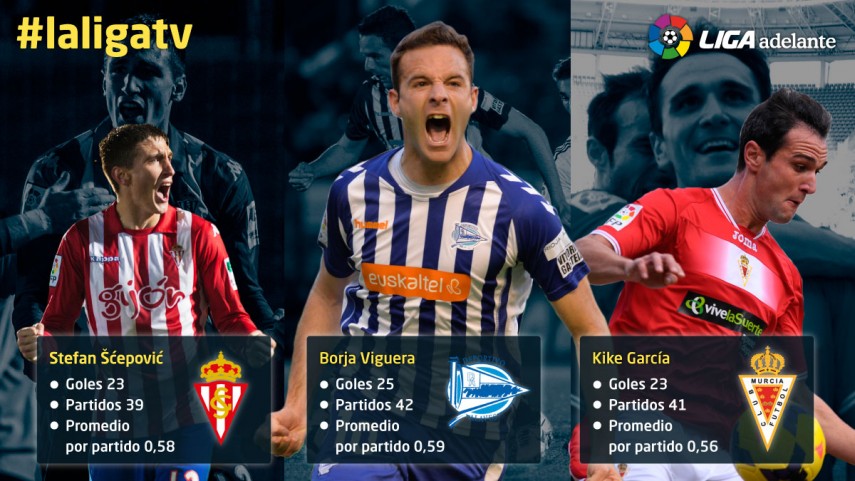 Borja Viguera, with 25 goals, is the top scorer in the division. Šćepović and Kike García complete the podium with 23 each.

The 2013/14 regular season has come to a close and it is time to take stock of the best players in the championship. These include those whose goals have helped their teams fulfil their dreams. Those who have been able to stand out in a division that was more vibrant and hard-fought than ever, one of the most evenly matched Liga Adelantes of all time.

Borja Viguera: king of the goal If there is one player that has goal-scoring flowing through his veins it is the Deportivo Alavés striker Borja Viguera. The best season of his sporting career ended with 25 goals in the Liga Adelante, without missing a single fixture. Viguera has played in all 42 games of the season and has emerged as the leading scorer for the Albiazules in the ever-demanding Liga Adelante.

Viguera’s goals not only earned him his best personal tally but also secured his team’s survival in the Liga Adelante, for which only a win was enough in the final match of the season against Real Jaén. His great physical presence and ability to find the net have made him the Liga Adelante’s top scorer.

Stefan Šćepović: youth and progress Alongside Dejan Lekić he formed a top forward pairing, not just in terms of their height but also their huge number of goals. Šćepović, with 23 goals to his name, was part of the most feared attack in the division with 63 scores this season. The last three were in Sporting’s 3-0 victory over CD Tenerife, confirming the Asturian side’s inclusion in the play-offs for promotion to the Liga BBVA.

It came as no surprise when the rangy Serbian striker sealed the win and took second place in the ranking of top scorers, level with Kike García but with a better average per game than the forward from Motilla de Palancar. The Sporting player averaged 0.58 goals, compared to the Spaniard’s 0.56.

Kike García: coming of age After several seasons at Murcia, Kike García has emerged as one of the stars of the Pimentoneros. His great season has helped his team earn a place in the play-offs for promotion to the Liga BBVA. The striker from Cuenca maintained a high standard in the 41 games he was involved in.

His great performances have filled him with confidence and he showed it on the field every time he had a chance on goal. It is no coincidence that he is the player with the highest number of shots in the Liga Adelante, with 145, a sign that he has attempted to score at every opportunity.