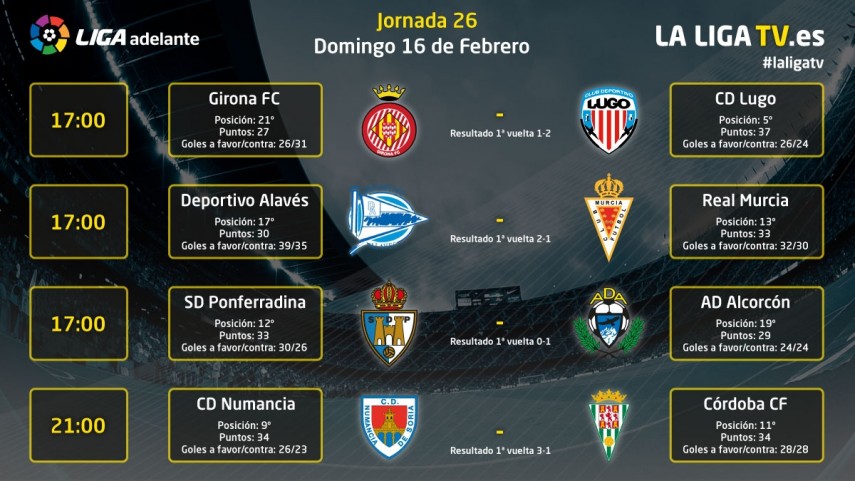 Four Liga Adelante matches this Sunday, such as the passionate Numancia - Córdoba, will be available for viewing on the new LFP.es platform.

The excitement of the Liga Adelante continues and all lovers of Spanish football will be able to enjoy as many as four matches live on LFP.es' La Liga TV platform.

At 17:00 three Liga Adelante games will kick off. In one of them Girona FC hosts CD Lugo, one of the most thrilling teams of the championship so far, which will be fighting to keep its place the zone that offers a playoff for Liga BBVA promotion. The same clash in the first round of matches ended with a 1-2 victory for the Catalonian outfit on matchday five.

For its part, Deportivo Alavés will be looking to build on its recent improvement when it squares off against Real Murcia CF. In addition, SD Ponferradina and AD Alcorcón, two teams separated by just four points in the table, will provide another enticing clash at 17:00.

To close out the day's play on La Liga TV, the 21:00 match in the Nuevo Estadio de Los Pajaritos will see CD Numancia host Córdoba CF, who come into the game with renewed strength after Luis Carrión was provisionally named as the blanquiverde coach. Both teams are in the fight for the Liga BBVA promotion playoff spots.