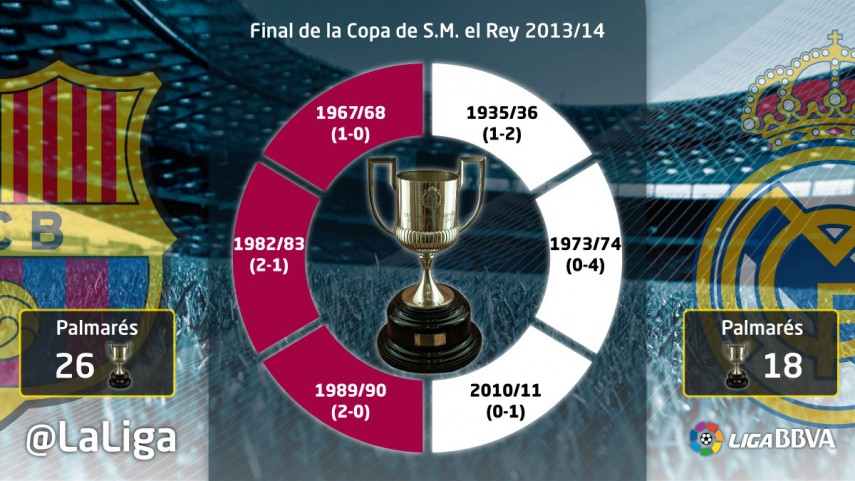 Stats and trivia on the Copa del Rey final

Barcelona and Real Madrid will play in their seventh Copa del Rey final in their bids to lift the first trophy of the year.

The Copa del Rey final is one of the most anticipated matches of the season. FC Barcelona and Real Madrid CF come into the match at the end of a tough competition in which they have left in their wake some of the biggest contenders for one of the year’s biggest prizes.

After the clash on Wednesday at 21:30 CET, the azulgranas or the Whites will be celebrating a title. Here are some titbits on the grand finale:

DID YOU KNOW THAT... FC Barcelona and Real Madrid have met six times in the final of the Copa del Rey?

The balance of results between the two teams could not be closer, as each has three victories, but the deadlock will be broken in the Mestalla. The azulgranas have scored eight goals in the six matches while the side from the capital have six.

DID YOU KNOW THAT... Real Madrid has played in more Copa del Rey finals than any other team with 38?

The Whites have reached the last match of the knockout tournament on 38 occasions, lifting the trophy on 18 of them. However, it is the team from Barcelona that has the most Copas in its trophy rooms, with 26.

DID YOU KNOW THAT... Barça has won four of the last five cup finals it has played?

DID YOU KNOW THAT... Gerardo Martino could become the third Argentinian FC Barcelona manager to win a Copa del Rey?

The azulgranas coach, who could win his second title as the manager of FC Barcelona, could also join Helenio Herrera (1959 and 1981) and César Luis Menotti (1983) as the third Argentinian man to win the cup at the helm of Barça.

DID YOU KNOW THAT...  Carlo Ancelotti has won eight of the eleven finals he has won as a manger?

Real Madrid’s Italian coach is an expert in finals. Ancelotti has won eight of the eleven one-match finals he has played, and two of the losses came on penalty shootouts. In addition, Madrid’s coach has won all three national cup finals he has reached: two Coppa Italias in the dugout at AC Milan and an FA Cup at the helm of Chelsea FC.

DID YOU KNOW THAT... Lionel Messi has scored two goals in the three finals he has played?

The Argentinian striker has taken on Real Madrid five times in the Copa del Rey, but has never managed to find the net against them. Messi scored in the 2008/09 final (4-1) and in that of 2011/12 (3-0) both against Athletic Club.