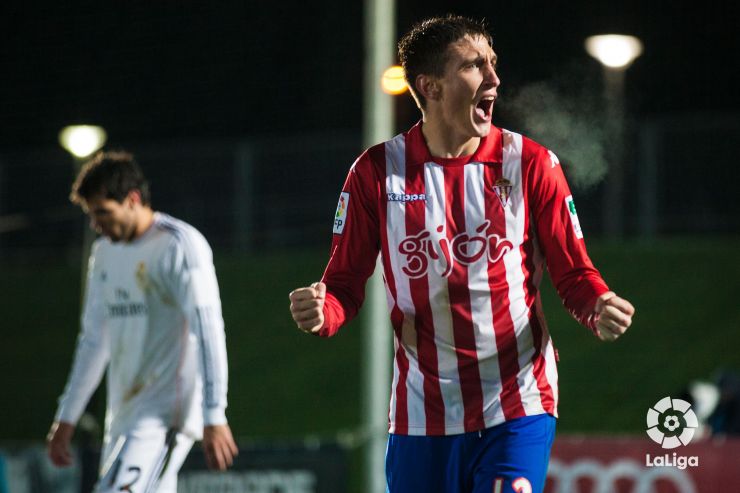 Sporting moves to the top of the Liga Adelante

Deportivo’s defeat to Las Palmas and Sporting’s win against Castilla sees the Asturians move to first place. Meanwhile, Alcorcón climbs out of the relegation zone with a victory over Tenerife.

The second half of the Liga Adelante season got off to a surprising start, with, among other things, a change at the top of the league table. After a 2-1 win against Real Madrid Castilla, Sporting Gijón is now the new league leader. Helping the Asturians climb to the no. 1 spot was the defeat suffered by Deportivo de La Coruña at the hands of Las Palmas.

Sporting continues to impress and today in the Alfredo Di Stéfano Stadium the Asturians got their ninth victory of the season courtesy of goals from Carlos Carmona and Stefan Šćepović, who with 16 goals is still in the race to be the league’s top scorer. Meanwhile, Las Palmas beat the Galicians 2-1 in a match that was made extra special by the return of Juan Carlos Valerón to Riazor. The Canary Islanders now climb to fourth spot.

In the upper half of the table, Eibar remains in third place after beating Real Jáen 2-0, while Recreativo de Huelva and Real Zaragoza were held to draws against Real Murcia and Hércules respectively. As well as that, Córdoba finished the weekend with its first win on the road in four months in El Toralín and now lies in seventh place, on the same points as Recreativo (33), a side that sits in the play-off spots for the Liga BBVA.

Towards the bottom of the table, Girona and Deportivo Alavés drew 1-1 in Mendizorroza, and both sides remain in the relegation zone. Meanwhile, Alcorcón was able to move out of the danger zone thanks to a fantastic 4-0 win against Tenerife, which caused the Canary Islanders to drop to 19th place. Castilla sits in last place after being beaten by Sporting.

Other standout moments of the weekend included RCD Mallorca’s 4-1 victory against Sabadell, which put an end to the Catalans’ run of four straight wins, while Lugo’s hard fought win against Numancia brought a smile back to the Galicians’ faces after going seven matches without a victory.