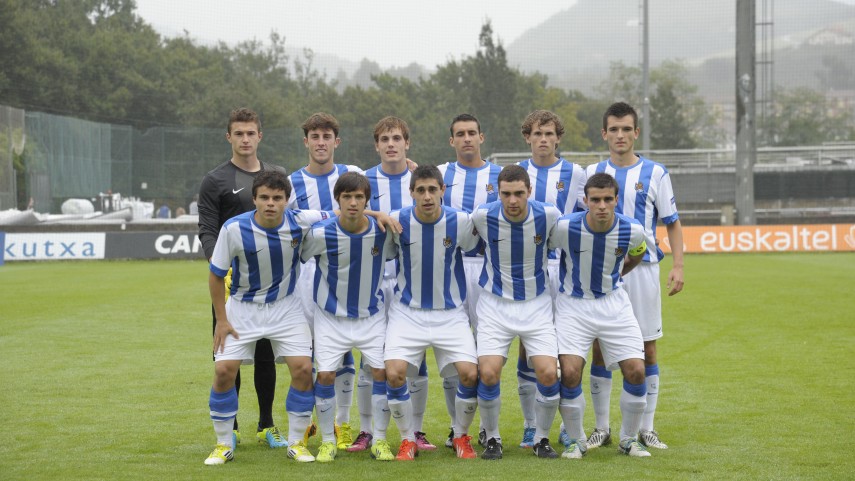 Real Sociedad, Real Madrid, Atlético and Barcelona have had excellent campaigns so far in the inaugural UEFA Youth League with all four topping their groups.

UEFA's inaugural youth club competition, the UEFA Youth League, has been a great success on the continent and the youth sides of the Liga BBVA clubs taking part in the UEFA Champions League are doing particularly well as they have all qualified for the next round of the competition by winning their respective groups.

Real Sociedad de Fútbol competed in a tough Group A, which included teams such as Manchester United FC and Bayer 04 Leverkusen. But the side from Donostia is not easily intimidated and won 1-5 in Germany and 0-1 in Manchester, and although Jon Arrillaga's men drew and lost two of their matches, they finished in first place, in no small part thanks to Jon Bautista, the top goal-scorer, and Martin Merquelanz.

Real Madrid CF did not have an easy draw in Group B either, however, they pulled off some impressive victories, including against Juventus (6-2) and Galatasaray AŞ (4-1). Juan José Narváez is one of the competition's most prolific strikers with five goals in five matches while Francisco José Rodríguez and Javier Muñoz have also scored key goals.

Just like their bigger brother in the Champions League, Atlético topped Group G and did so with just one defeat (3-1 to FC Porto). The two victories against Zenit, 4-2 at home and 3-4 in Saint Petersburg, set the team on the road to qualification and the rojiblancos, partly thanks to four goals from Ivi during the group stages, eventually stamped their pass to the round of sixteen. Roberto Fresnedoso's side is the third highest goal-scorer with 17 goals.

For their part, Jordi Vinyals' Barça have had a very impressive run. It was the first team to guarantee its participation in the second round, doing so after four matches, and ending with eight points more than second-place AC Milan without losing a group-stage match (they finished with five victories and a draw). Their top goal-scorer, Munir El Haddadi, who found the net five times, and Toni Sanabria with four goals, are two of the Catalonian outfit's key players.

These four Liga BBVA clubs, all with successful youth academies, are now making a name for themselves on the continent and Spanish football can be very proud of its representatives in the Youth League, as it is the only country to have all four of its teams reach the knockout phase.