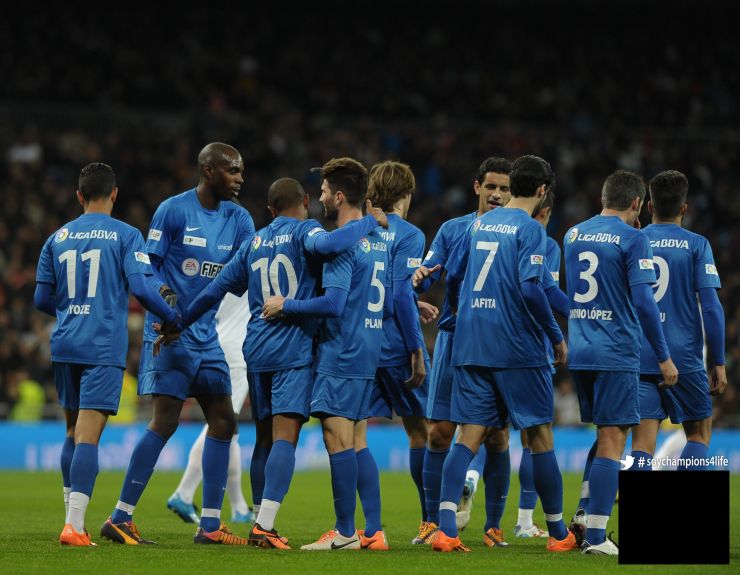 Spanish football turns its attention to 'Champions for Life'

Liga BBVA and Liga Adelante players were proud to be able to contribute to raising money for millions of children in the Philippines.

It was a night on which the result was of little importance, on which all Liga BBVA and Liga Adelante reams were fighting for the same cause, and on which goals and competitiveness made way for charity. It was a magical night when football demonstrated that, as well as being a spectacle, it can help people in need.

But it was also a football match in the fiercest of rivals felt at home playing in the Estadio Santiago Bernabéu, as FC Barcelona player Adriano Correia explained: "It was an honour to play in this stadium because today there were no rivals. The only important thing is to keep helping the kids who need this so much". Also Gabi Fernández, oneof Club Atlético de Madrid's stars, was proud to be able to help: "We have demonstrated that there is a bond in football and that we have the ability to use it to collaborate".

Although the result was of little importance, the scoreboard changed as many as fourteen times. Two of the nights goal-scorers, Quini Álvarez of AD Alcorcón, and Yuri de Souza of SD Ponferradina, were "delighted" to take part in such an important event, "with all the players from the Liga BBVA and the Liga Adelante… And scoring a goal to top it off", said Álvarez. Ponfe's Brazilian striker also found a couple of reasons to leave Madrid with a smile on his face: "I was able to help raise money for thousands of kids who really need it and also I can now say that I have scored a goal in the Santiago Bernabéu".

With thousands of children amongst them in the stands of the Santiago Bernabéu, the crowd enjoyed a fantastic party atmosphere and a footballing spectacle on the pitch, while the money collected made it a day to remember: more than half a million euros were raised to help those affected by typhoon Haiyan. "The public has really responded well and our sport is happy to help whenever we are needed", stated Roberto Trashorras, the Rayo Vallecano player. "Ours is a very giving country, and so are our fans. Being here is very important and I hope to be able to do this again next year", said Villarreal CF player Jonathan Pereira.