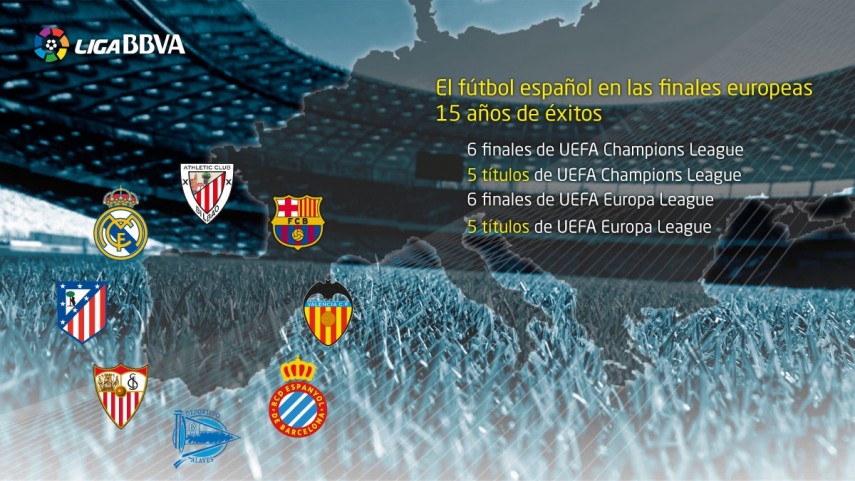 Three of the seven Spanish teams who have participated in European competition this season have reached the finals.

Spanish football's dominance in Europe's top competitions is a reality. Of the seven teams participating, three of them will be in title bouts, and another three reached the knockout stages of the two competitions. The Liga BBVA's presence has been predominant, as this season only Real Sociedad de Fútbol was eliminated by a foreign team. The rest have fallen to Spanish clubs: Real Betis Balompié, FC Barcelona and Sevilla FC or Valencia CF.

Spain will be represented in both the UEFA Champions League final and the UEFA Europa League. It is a situation fans of Spanish football are already familiar with, as in recent years Spanish clubs have had a stronghold on the continental competitions. Spain, with 13 titles and ten runners-up, is at the top of the UEFA Champions League table of nations. In the Europa League/UEFA Cup, Spanish football is second behind Italy with seven winners and five second places.

Champions League: a historic match
Real Madrid CF and Club Atlético will both be in Lisbon on the 24th of May. The Champions League final will be a battle between two of the best teams in the Spanish top-flight. But it will also be a historic event because, although two clubs from the same country have previously disputed a European final, it will be the first time two clubs from the same city do so.

In recent seasons the late stages of the Champions League have been replete with Spanish teams. Since 2000/01 there have only been occasions on which a Liga BBVA team has not reached a European semi-final, a fact that puts Spanish football at the top of UEFA's ranking, looking down on England, Germany, Italy, Portugal and France.

Europa League: a guaranteed finalist
Spain will also be represented in Turin. Sevilla or Valencia will win a place in the final of the Europa League on Thursday. It is a clash between two Spanish teams that demonstrates the supremacy of Spanish football.

In the last ten years, the presence of Spanish teams in the final of the Europa League/UEFA Cup has been commonplace. Five finals with clubs from the Liga de Fútbol Profesional, and a clean sweep of titles from them. Valencia, Sevilla, RCD Espanyol, Atlético de Madrid and Athletic Club have taken the quality of Spanish football to the top.