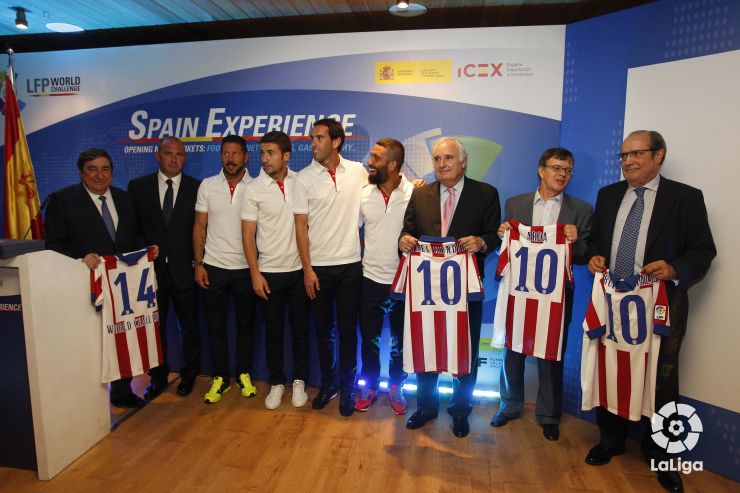 Spain and Turkey united for the 'Spain Experience'

The LFP World Challenge Tour brought together sport and business at a grand event in which the Club Atlético de Madrid squad participated alongside numerous personalities from Turkey.

The small town of Cesme experienced a very special celebration on Tuesday thanks to the 'Spain Experience', one of the centrepiece events of the LFP World Challenge programme. At the event, football, Spanish culture and businesses came together to promote Marca España alongside the Liga de Fútbol Profesional with the collaboration of ICEX and, in this case, Club Atlético de Madrid.

The 60 invitees who enjoyed the event with a Spanish twist were accompanied by the Rojiblancos' coaching staff, with Diego Pablo Simeone and José Luis Pérez Caminero leading players such as Arda Turan, Diego Godín and Gabi and LFP ambassador Augusto César Lendoiro, who thanked the guests for attending and encouraged them to closely follow the Spanish league, "because it’s the best league in the world".

They were also joined by Rafael Mendívil, Spain's ambassador in Turkey, Gustavo Jaso, commercial and economic representatives of the ICEX office in Ankara, Emre Alkin, the general secretary of the Turkey Football Federation and Antonio Alonso Sanz, the vice president of Atlético de Madrid who spoke of his gratitude for the opportunity to take part in the LFP World Challenge event.

"Thank you for allowing us to enjoy Atlético de Madrid in Turkey and for making them the bridge between this country and Marca España", said Spanish ambassador Rafael Mendívil. He was one of the most sought-after figures throughout the 'Spain Experience' event, as he spoke of his passion for La Liga and also served as an interpreter for Turks and Spaniards during the event. "This event is a great opportunity for everyone, as well as having become a Spanish-Turkish celebration", he added.

LFP ambassador Augusto César Lendoiro highlighted the main objective of the LFP World Challenge project: "The Liga de Fútbol Profesional is putting a lot of effort into making Spanish football the driving force behind the promotion of Marca España both in our country and overseas; and I think that we’re achieving that". After the conclusion of the 'Spain Experience' event, Lendoiro rated the second LFP World Challenge Tour as "outstanding": "It was a difficult challenge, but the result is looking very good".