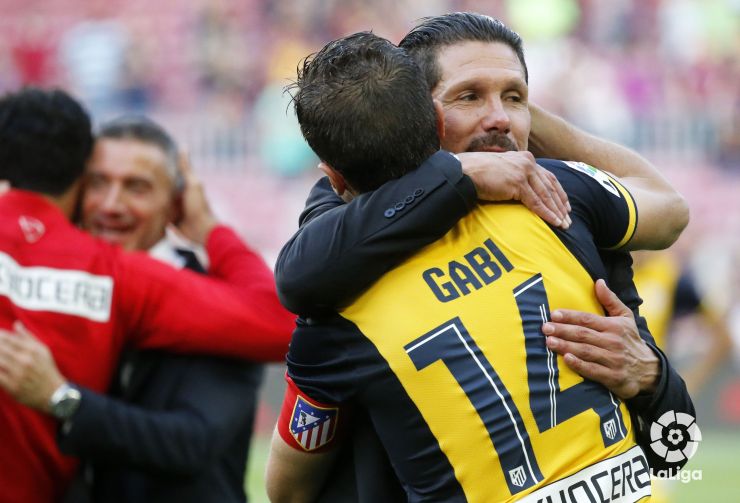 After winning their tenth Liga BBVA title against Barcelona, the Atlético technical staff and players celebrated winning the league on the Camp Nou pitch with their fans.

Joy, emotion and tears were on full display as the Club Atlético de Madrid players celebrated in the middle of the Camp Nou after drawing 1-1 with FC Barcelona and securing their tenth Liga BBVA title.

After the final whistle, floods of joy began to descend on all the members of the rojiblanco squad. After being thrown in the air by his players, Diego Pablo Simeone, the Atlético manager, stated: "This is incredible, a joy that cannot be expressed in words. I want to thank the players and the people who have always believed in us. There is no replacement for hard work. At the final whistle I thought about a lot of people, like Luis Aragonés, who I'm sure was cheering us on during the second half from heaven".

On the match itself, he highlighted the cool headedness his players showed during the most difficult moments. "We were doing our job well during the first half, the important thing was to stay calm. We knew that if we got a goal we were going to have a great chance of winning the championship", Simeone declared.

After Barcelona took the lead in the first half through a stunning Alexis Sánchez goal, it was Diego Godín, with a header right after the break, who made it 1-1, an equaliser that ended up being key to Atlético being proclaimed this season’s Liga BBVA champions. "We have fought all year, doing an awesome job. Taking on opponents like Barcelona and Real Madrid CF is impressive. Simeone is extremely important. At half-time he told us he was sure we'd score a goal", said the Uruguayan.

Juanfran, who like many of his team-mates has won his first Liga BBVA, was very happy after the game. "It's an unforgettable experience. It's the first time I've experienced it and I want to do it again. We’ve competed against big teams like Barcelona and Real Madrid. This is an Atlético that will do down in history. We have a great team with a lot of heart, a lot of soul. We care a lot about this shirt", said the Rojiblanco international.

Finally, David Villa, who won the title last season with Barcelona, has clinched it again in his first year with Atlético. The Spanish international praised his team-mates and his manager. "I'm really happy to cap off the Liga BBVA in such a nice way. This team never gives up. We started with everything going against us, two injuries and losing, but the team responded. We played like we have all year. 'Cholo' is the key, the person we all turn to for inspiration. We're a band of warriors", said Villa.