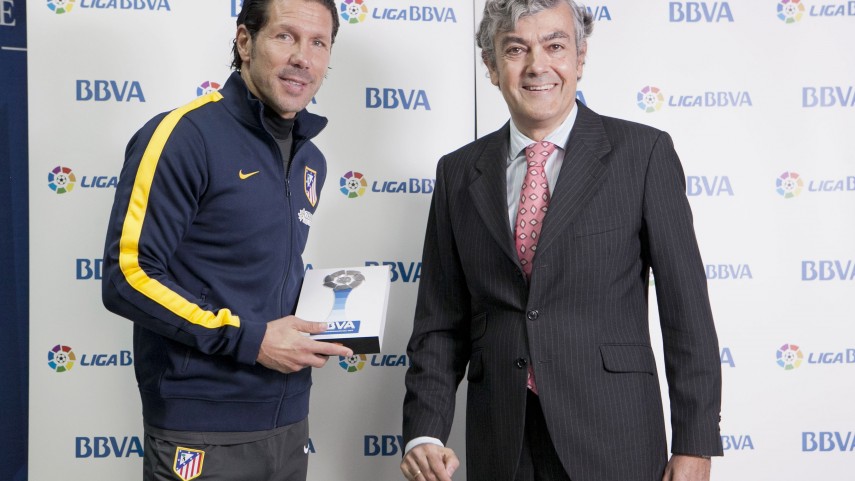 Simeone is named the best Liga BBVA manager for October

The Argentine manager is awarded the prize thanks to Atlético's fantastic month, with the team still continuing its incredible start to the season.

Diego Pablo Simeone has been bestowed with the Liga BBVA manager of the month award for October, an honour handed out by the official sponsor of the Liga de Fútbol Profesional.

"Without the effort, commitment and passion that the players have, as a manager one couldn't have this moment. We're building a hard working team with a lot of humility, a lot of patience, added to the club's commitment to maintaining its structure and the stability that we're given by the players on the pitch", said Simeone upon receiving the award.

Of the four Liga BBVA matches played in October, the Red and Whites won three and lost one, helping the team maintain its strong position in the Liga BBVA table, where it lies second just one point behind the leader, FC Barcelona. The Madrid outfit led by 'Cholo' Simeone started the month with a 2-1 victory over Celta Vigo, although suffered its only defeat of the season in its next game against RCD Espanyol (1-0).

However, Atlético showed its ability to get over that loss in its next encounter by thrashing Real Betis 5-0. The team then beat Granada CF 2-1 to close the month of October with a balance of nine goals for to three goals against. Like it has been since Simeone joined Atlético in December 2011, the team looks like a serious and competitive contender. All the players in the squad agree on the importance their manager has in terms of the incredible scenes the Vicente Calderón is currently paying witness to.