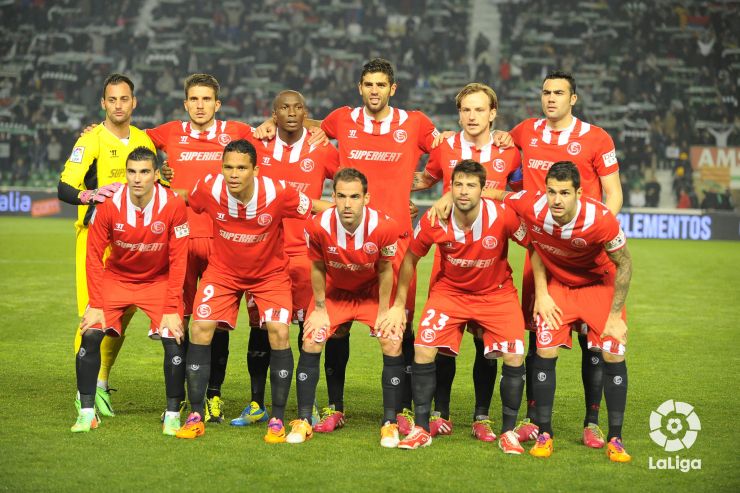 Sevilla's consistency in front of goal

13 different players have found the net so far this season for the Andalusian side, who have only failed to score in two of the first 20 matches in the Liga BBVA.

Sevilla FC took their time to get started, six weeks to be precise, which is how long they had to wait before their first Liga BBVA win of the season. But since then, Unai Emery's team has been one of the championship's best sides, and currently lies in seventh place with 31 points.

Having strung together eight matches without a loss, including five victories, the Andalusian outfit is closing in on the European spots, all thanks to some clinical finishing. It is the sixth highest-scoring team in the Liga BBVA having found the net 37 times. Also, Sevilla's goal rate is thanks to as many as 13 players. FC Barcelona follow with 12 different players and Club Atlético de Madrid, Villarreal CF, Athletic Club, Real Sociedad de Fútbol and Málaga CF, all have eleven.

The fact that Sevilla has only failed to score in two Liga BBVA matches so far this season is thanks to five defenders, six midfielders and two strikers. Alberto Moreno (two goals), Daniel Carriço, Cala, Coke and Federico Fazio (all with one) are the Sevilla defenders to have found the target. In total, Emery's defenders have scored six goals, five of which were essential to gaining points.
Elsewhere, the midfielders to have graced the score-sheet are Ivan Rakitić (8 goals), Vitolo (3), Jairo (2), Diego Perotti, Vicente Iborra and Stéphane M'Bia (all with one). Undoubtedly, one of Sevilla's biggest stars, the Croatian Rakitić, who has scored two braces (against Rayo Vallecano and Real Madrid CF) in the Liga BBVA this season, has made an invaluable contribution to Seville's haul of points. In Vitolo's case, whenever he scores, Sevilla collect three points (matches against RCD Espanyol on matchday 13; Real Betis Balompié on matchday 14 and Getafe CF on matchday 18). Jairo, for his part, helped clinch one win and one draw with the two goals he has pocketed so far.

Sevilla's strikers, Kevin Gameiro and Carlos Bacca, have certainly proved their eye for goal since their arrival in the summer. Gameiro has scored six goals that have helped Sevilla to as many points. He scored a brace on matchday 3 in the team's 2-2 draw against Málaga CF and also netted in both the 2-1 victory over UD Almería on matchday 8 and the 1-2 win against Granada CF on matchday 15.

For his part, Bacca is Sevilla's top goal-scorer this season with nine. The Colombian striker had to wait until matchday 6 against Rayo to score his first two goals in the Liga BBVA. Since then, Bacca has been vital to the Andalusian side's progress, scoring in six of the matches they ended up winning and in one that ended in a draw. In fact, between matchdays 11 and 18 he scored 6 times.