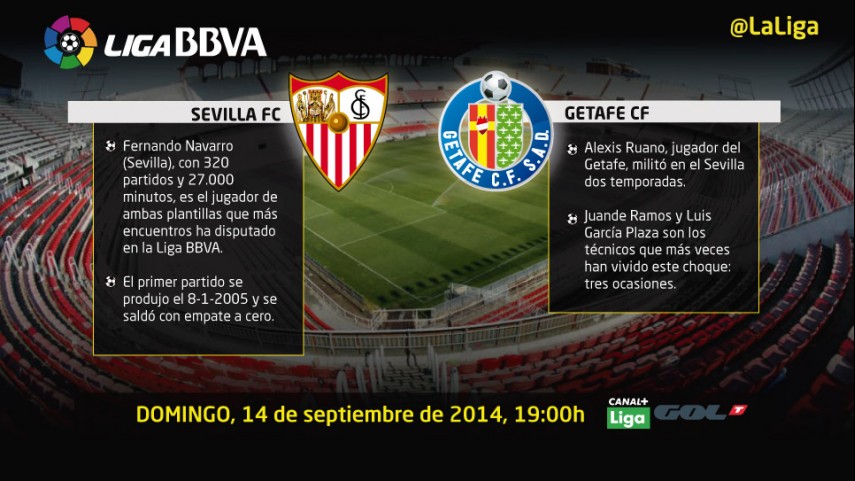 The team from Seville, with four points in the table and after making a good impression, will face an Azulones side who redeemed themselves against Almería after their slip-up on matchday one.

Sevilla FC and Getafe CF go head to head in a clash in which the Seville side will fight to continue their good run against an Azulones team who arrive in the Andalusian city determined to claim their second victory on the trot after beating UD Almería 1-0 on matchday two.

Team news  The big news for Sevilla is that they will be without their first-choice goalkeepers Mariano Barbosa and Beto, leaving Unai Emery short of options between the posts. As for the rest of the squad, Cristóforo, Kevin Gameiro and Alejandro Arribas are also unavailable, all through injury. Meanwhile, for Getafe, Babá will be on the only player left out of the 18 selected by Cosmin Contra for the clash with Sevilla.

Unai Emery, the Sevilla manager, is not content despite his team’s good results. "We have to do a bit better than we did against Valencia and Espanyol". The visiting boss, Cosmin Contra, is aware of what his team faces this weekend, but he is optimistic: "We are going up against one of the best teams in Spain, but we have been working very well and that gives us a lot of confidence that we can get something positive out of the game".

Who will open the scoring? Online betting only listens to statistics and numbers.

In the last three Sevilla-Getafe matches held at the Sánchez Pizjuán three goals were scored. If there are three goals in the match this Sunday, the odds are 3.60.

In five of the last six clashes between Sevilla and Getafe, the Hispalenses scored the first goal, and if Sevilla score first this Sunday, the odds are 1.40. If Getafe open the scoring, we’ll win € 3.10 per euro wagered.