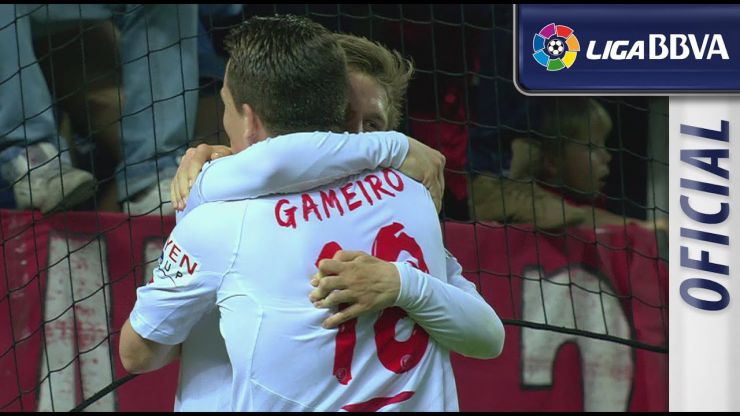 Goals from Rakitić, Figueiras and Gameiro (2) set alight the Ramón Sánchez-Pizjuan Stadium. Javi Guerra scored the only goal for Valladolid.

Sevilla FC overcame Valladolid CF 4-1 on the 28th matchday of the Liga BBVA. Unai Emery continued his winning ways making it four victories on the trot, ending Valladolid's good run to leave them in the relegation zone with 26 points. Pending the outcome of Real Sociedad de Fútbol's game, the Andalusians climb into European contention.

The match went in Sevilla's favour in the first half and they went into the break with a 2-0 lead. Ivan Rakitić scored the first goal from a penalty after Lluís Sastre brought down Marko Marin in the area. The home team grew in confidence and their chances gradually came. After forty minutes, Kevin Gameiro scored the second goal with a powerful shot following a good pass from Marin.

In the second half the referee gave another penalty in favour of the Andalusians after a handball by Stefan Mitrović, which Gameiro again hit into Diego Mariño's net. In the final moments, Diogo Figueiras scored Sevilla's fourth, though Javi Guerra bagged one for Valladolid to make it 4-1.