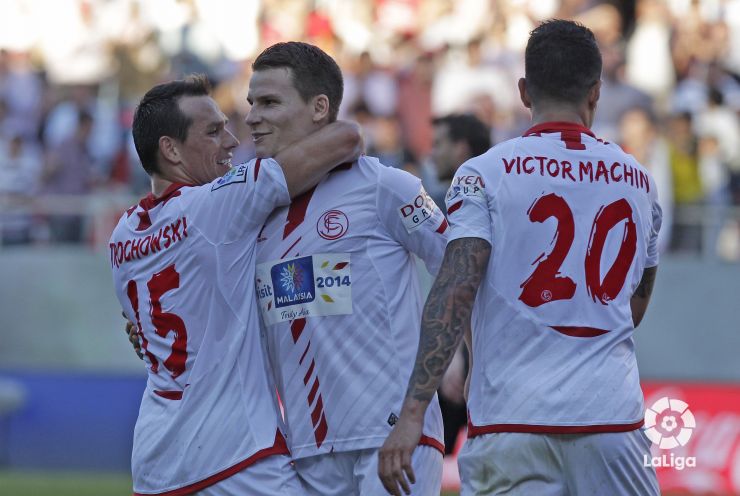 Unai Emery’s disciples made the most of their good form with a 4-0 win over a Granada side yet to sure up safety in the division.

Sevilla enjoyed a resounding 4-0 win against Granada in matchday 34 of the Liga BBVA. As such, Unai Emery's men remain hot on Athletic Club's heels, with the Basques currently occupying fourth place in the league.

The away side looked extremely well organised at the beginning of the match but a bit of misfortune allowed Sevilla to take the lead. Diego Mainz attempted to clear a Kevin Gameiro cross but, unluckily for him, his clearance ended up in the back of Orestis Karnezis' net. Despite the own goal, Lucas Alcaraz's side remained resolute and Recio almost caught Beto in the Sevilla goal off guard. However, the increased confidence the home side has picked up lately allowed them to keep their heads defensively and hold onto their lead.

Another defensive slip up by the visitors allowed Sevilla to all put wrap up the game in the opening minutes of the second half. Gameiro made the most of a poor Tiago Ilori pass to double the scoreline for his team. The goal was a massive blow for Granada, who didn't know how to react to going two goals behind, while the home team were able to control the game and treat the Ramón Sánchez-Pizjuán to a goal-fest. Cameroon’s Stéphane M'Bia got the third and Vitolo capped off the 4-0 victory, a result that keeps Sevilla’s search for a place in the next season’s UEFA Champions League alive.