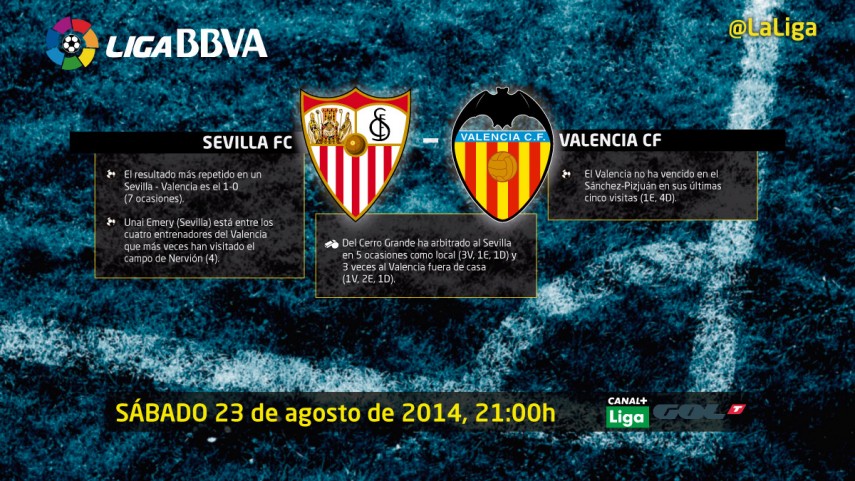 Sevilla and Valencia open in the Ramón Sánchez-Pizjuán

The stadium in Seville will stage a passionate clash where Banega and Unai Emery will be reunited with their ex-colleagues.

Liga BBVA matchday 1 gets underway in the Ramón Sánchez-Pizjuán where Sevilla FC host Valencia CF. The clash marks the reunion of Éver Banega and Unai Emery with their old team. In addition, many will be watching FC Barcelona B academy players, Denis Suárez and Gerard Deulofeu, who will be hoping to convince the Sevilla coach that they are worthy of minutes this season.

Emery will be without the injured Kevin Gameiro and Sebastián Cristóforo as the season kicks off, as well as Alejandro Arribas who will be a doubt until the last minute. In terms of the Valencia squad, their coach, Nuno, has left five players off the list: João Pereira, Jonathan Viera, Hélder Postiga, Jonas and Vinícius Araújo.

"Starting at home is the first step towards the team’s confidence and desire. We're excited about the match and looking forward to connecting with the fans, that’s the only way we can get on top of teams of this calibre. It is a great Valencia side that has taken a step forward with some big signings", stated Unai Emery.

Nuno, for his part, also analysed his opponents: "We're ready to get out there and play the match, to compete but not in search of revenge. We have to handle them well, we know what we are facing because we know Sevilla. We have been analysing the team for a while. The important thing is concentration and interpreting the match in the right way".

DID YOU KNOW… that the first ever clash between Sevilla FC and Valencia CF took place in 1927/28?