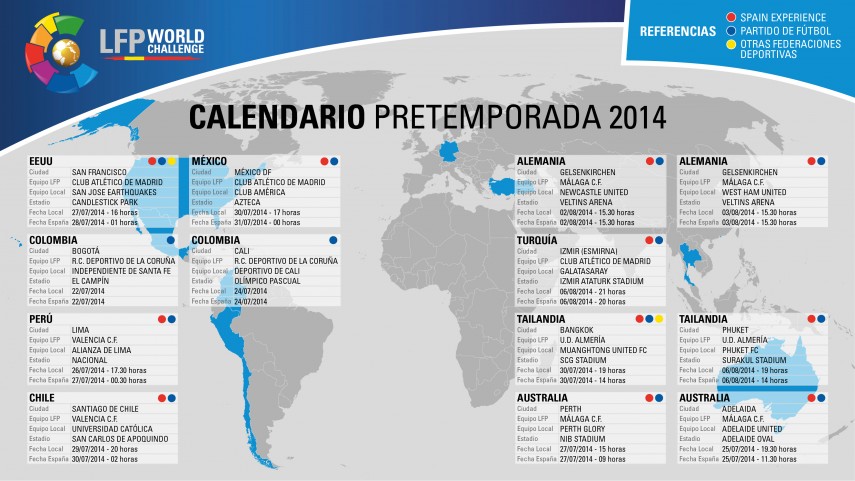 The schedule of the second LFP World Challenge tour

Atlético de Madrid, Málaga CF, RC Deportivo, UD Almería and Valencia CF are the sides from La Liga who will travel to different countries to promote Marca España throughout the world.

The second LFP World Challenge is about to get under way, with five sides having pre-seasons between July and August in different countries thanks to the project headed up by the Liga de Fútbol Profesional.

It is a strategic and commercial plan that will take Marca España and Spanish football closer to all parts of the globe through matches, special events ran by ICEX, co-fraternising events with sports stars from other sporting federations and a multitude of activities.

RC Deportivo de La Coruña will start the LFP World Challenge tour in South America. The Galician side will be accompanied by the Liga de Fútbol Profesional president, Javier Tebas, throughout their stay in Colombia. Deportivo will play on 22 July in Bogotá against Club Independiente de Santa Fe, and two days later they will take on Asociación Deportivo Cali.

Valencia CF are another of the sides to travel to South America, where they will first touch down in Peru to take on Club Alianza de Lima on 26 July (local date), and then three days later they face CD Universidad Católica in Chile. The Valencia travelling party will be accompanied by Augusto César Lendoiro who is the LFP ambassador for the LFP World Challenge tour.

Club Atlético de Madrid will start their journey in San Francisco, where they will play their first friendly against San Jose Earthquakes on 27 July (local date). This tour will also have the presence of Javier Tebas and Hugo Sánchez, who is the Liga de Fútbol Profesional ambassador to Latin America. The women's national hockey team will also complete a stage in Stanford (California) from 21 July, at the university, and will take part in corporate social responsibility initiatives alongside Atlético in San Francisco as part of this event.

The Rojiblancos will also visit one of Mexico's top sides, CF América, where they will once again be accompanied by former footballer Hugo Sánchez. The tour will finish in Turkey on 6 August where they will face one of Europe's most historic sides, Galatasaray AŞ.

Australia is another of the LFP World Challenge's destinations, with Málaga CF visiting. Javi Gracia’s side will face Perth Glory FC and Adelaide United FC in Perth and Adelaide. Also, Málaga will travel to Germany to take on Newcastle United FC and West Ham United FC (2 and 3 August).

Asia, of course, could not miss out on the list of destinations where the LFP World Challenge will visit its fans. Bangkok and Phuket in Thailand are the two cities where UD Almería will play friendly matches against Muangthong United and Phuket FC respectively. The Spanish badminton team, led by European champion Carolina Marín, will play an exhibition match against the Thai national team complete with world champion Ratchanok Inthanon during Almería's tour of Thailand.

This is the second time that La Liga sides will export the image of Spanish football and values of the LFP and Marca España to other parts of the globe. Sevilla FC, Villarreal CF and Valencia CF were the three sides that played a number of friendly matches in Asia during May just after the league season had finished.

The Andalusian outfit were the first team to take part in the LFP World Challenge. Unai Emery’s men played against Pelita Bandung Raya in Indonesia and Selangor FA in Malaysia. Sevilla won both games in what was an excellent tour.

Hong Kong was the venue that hosted Valencia CF and Villarreal CF. They played alongside Hong Kong Rangers in a triangular tournament, which Valencia ended up winning. In this trip the Spanish female water polo team was also represented as they promoted the values of Spanish sport.