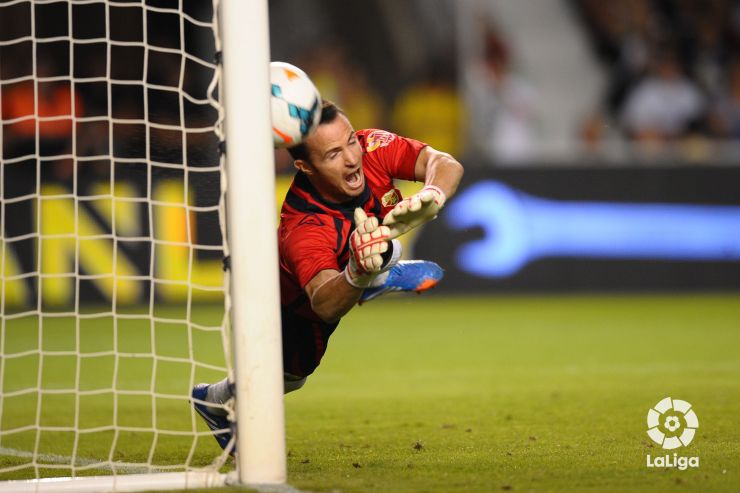 Safety between the sticks in Liga Adelante

As 2013 ends we revisit the best saves of the past 365 days of football in Liga Adelante.

Goals decide games, but saves win matches. It's no coincidence that the three sides with the best goalkeepers in Liga Adelante over the year 2013 are now all playing at the highest level, Liga BBVA.

Big performances, such as those from Manuel Herrera, the goalkeeper who conceded the fewest goals in Liga Adelante in 2012/13, helped Elche CF have an outstanding campaign and achieve promotion. Herrera went up with his side having only been beaten 25 times in 39 games, a ratio of 0.64 goals per game. Fran Escribá has carried on his good work with the Madrid side in Liga BBVA, where they've played 15 games to end a golden 2013.

Villarreal CF also gained automatic promotion, finishing second. In Juan Carlos, last season they had one of their bastions. The 25 year-old was the last line of defence in the free scoring Yellow side. The equilibrium that Juan Carlos brought between the sticks was evident, as he only shipped 27 goals in the 28 games that he played.

UD Almería enjoyed the safe pair of hands that was Esteban, who, aged 38 continues to produce saves all over Spain, not missing a single game last season and will be looking to continue his success this time round. Thanks to his performances last campaign he received the award of Liga Adelante’s Best Goalkeeper at the LFP Awards.

Germán Lux and Daniel Giménez also deserve a special mention. Lux, an impassable wall at RC Deportivo de La Coruña, has only conceded 11 goals in 18 games so far this season. Dani Giménez, for his part, has completed one of the best starts to a season in his career. His return to Alcorcón has seen the side become the second tightest defence in the league (conceding 13), behind only Deportivo. Giménez is on a run of eight games without conceding and is one of the league’s standout performers.

If they carry on this way, Lux and Giménez could be in line for the 2014 prize, however they have some stiff competition. Córdoba CF’s Mikel Saizar and Real Sporting de Gijón's Iván Cuéllar are impressing and will be up there when it comes to deciding Liga Adelante’s best goalkeeper.