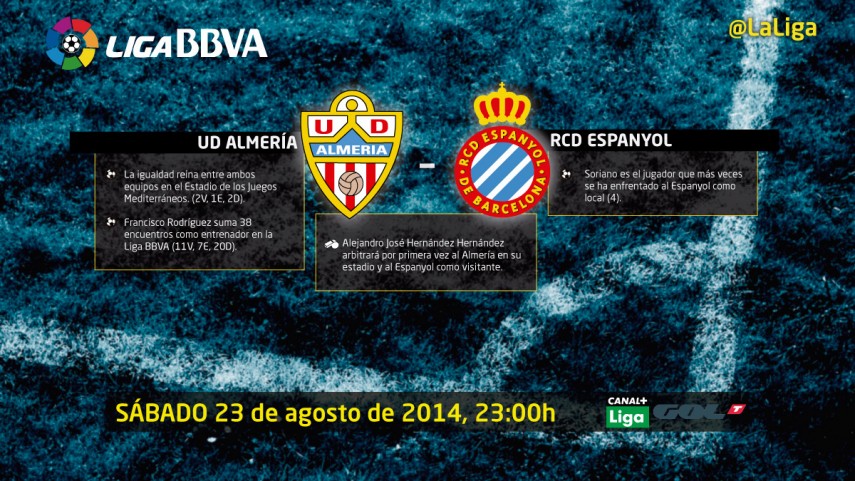 Renewed hopes for Almería and Espanyol

The Andalusian team, in their second consecutive Liga BBVA season, open against a Blanquiazules side whose manager, Sergio González, will be making his debut.

UD Almería and RCD Espanyol are approaching the new Liga BBVA season with renewed hope. After returning to the topflight and keeping their place their last season, the Andalusian outfit will be looking to establish themselves in the division without the scares of last season. For the Catalans, coach Sergio González, an ex-Blanquiazul player, will be making his debut at the helm with the hope of allowing his people to dream of big things.

Francisco Rodríguez, Almería's manager, with be missing an important player in his midfield, Nigerian international Ramón Azeez, who is serving a one-match ban. For Espanyol's part, the injured Héctor Moreno will miss the game and some of the newcomers could make their debuts, including Salva Sevilla, Anaitz Arbilla, Felipe Caicedo, Álvaro González and Paco Montañés.

"We've prepared well for the match with the opponent and, above all, with our system, our brand of football in mind. I think that we are perfectly fit to play a match that everyone is looking forward to at one hundred percent", revealed Francisco Rodríguez in a press conference.

Meanwhile, Sergio González, the Espanyol coach, spoke of his team's morale: "We're going there completely confident and you can tell by the atmosphere. The team are raring to play now and to do well. I hope they deliver. That is the idea, to play well and compete against a great side".