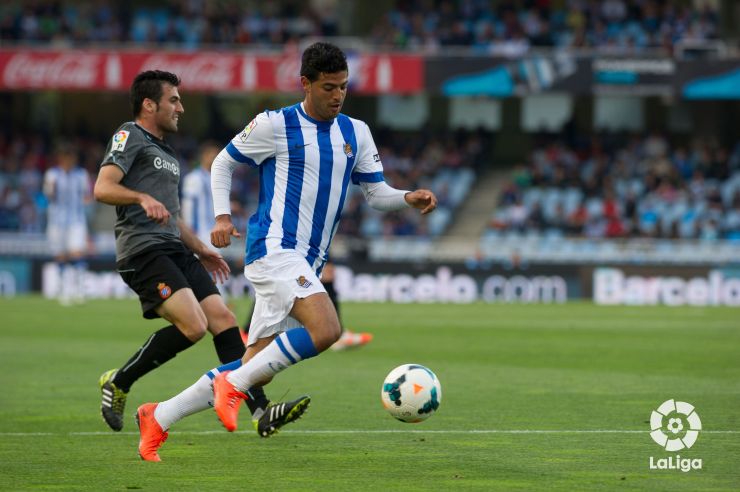 Real win at the death

A Carlos Vela goal in stoppage time earned the San Sebastián side victory over Espanyol to keep alive their European aspirations.

RCD Espanyol fell to a 2-1 defeat at the Anoeta Stadium on matchday 35 of the Liga BBVA against a Real Sociedad de Fútbol who were solid throughout the encounter and able to break the deadlock in the dying seconds.

Although the txuri-urdines dominated in the opening stages, Espanyol pressed and stole the ball to send out a message in Anoeta. They managed it in the 20th minute of the match thanks to a team move finished off by Jhon Córdoba. But Javier Aguirre's men were not celebrating for long. Sergio Canales responded with a goal from in front of the box and would have added another before half time had Kiko Casilla not stopped him.

In the second half, and aiming to stay within reach of the European spots, Real put the squeeze on. And they did so through their goalscorer. Canales led the charge and had a great afternoon, but the Espanyol keeper's reflexes his brace. Finally the home side's goal came in stoppage time thanks to a great play from the Mexican Carlos Vela, who made sure the three points stayed in San Sebastián.