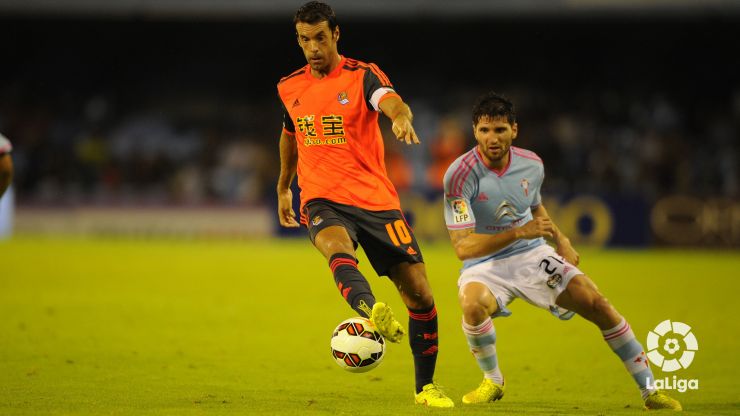 Real Sociedad snatch draw in dying moments at the Balaídos

Goals from Orellana and Larrivey put the home side ahead but Agirretxe and an own-goal from Jonny levelled the score.

RC Celta de Vigo drew 2-2 against Real Sociedad de Fútbol on matchday 3 of the Liga BBVA, in a thrilling encounter in which both teams showed their best sides.

The San Sebastián showed desire in the early stages of the game, but Fabián Orellana's goal in the 28th minute gave Eduardo Berizzo's men confidence and they took control of the game. Before the quarter of an hour was up, Real Sociedad struck fear into the home side with a Xabi Prieto shot that goalkeeper Sergio Álvarez managed to save. It was the best chance for the visiting side, followed by another, soon after, from Carlos Vela.

From then on, Celta started to wake up, and strikers Nolito and Orellana troubled the Txuri-urdin defence on several occasions. It was the Chilean striker who finished a great team move from the Galicians with a header, to make it 1-0. The persistence and hard work of the home side made it look as if the second goal would come, but it did not arrive until the beginning of the second half.

The team in blue went out with the same intensity and found their reward in the 48th minute through a Joaquín Larrivey strike, which initially came off the post but rebounded and, this time, he found the back of Eñaut Zubikarai's net. Then, when all seemed lost, Imanol Agirretxe appeared to close the gap with a score that breathed life into Jagoba Arrasate's men. In injury time, Jonny scored an own goal to make it 2-2, the final score in a very hard-fought encounter in which both teams made a good impression.