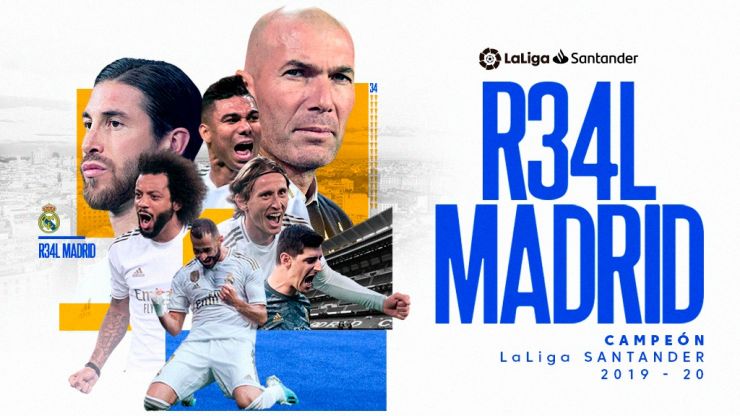 The club led by Zinedine Zidane lifts its 34th league title to round off a great season.

Real Madrid are now LaLiga Santander 2019/20 champions. Los Blancos have won the league with a game to spare after beating Villarreal at Valdebebas.

Zinedine Zidane's men are the winners of the most unusual league season in memory. They have racked up a total of 86 points, scoring 66 goals and conceding 22. Sergio Ramos and company have only lost eight matches and their fantastic form following the restart was enough for them to overcome FC Barcelona and finish top of the standings. Since LaLiga resumed with Matchday 28, Real Madrid have gone undefeated, winning every game in the process.

Led by unstoppable captain Sergio Ramos,  who in netting 10 times has enjoyed his most fruitful goalscoring season to date, and Karim Benzema, in the form of his life, Zidane’s charges have won LaLiga three years after their last conquest. Another crucial player has been Thibaut Courtois, who has only conceded 19 times over the course of the campaign. In addition, the desire, talent and enthusiasm offered by youngsters Fede Valverde,  Vinicius and Rodrigo have also contributed to Real Madrid’s successful season.