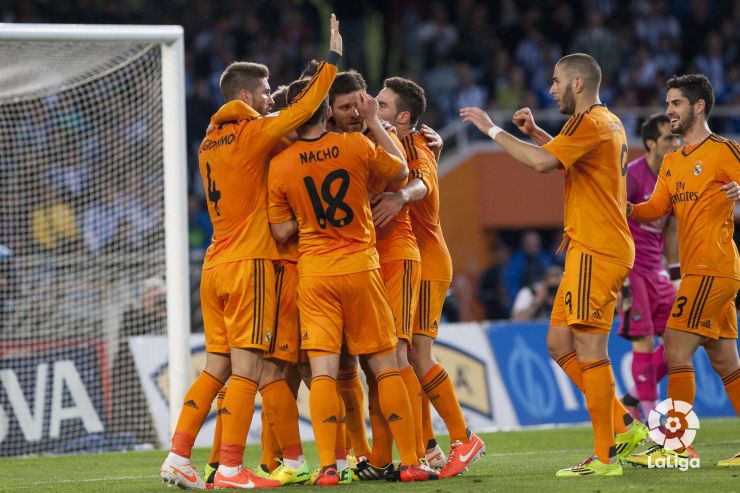 Real Madrid stay in the fight

Goals from Illara, Bale, Pepe and Morata earn a victory for Madrid against a Real Sociedad who created few chances on goal, keeping them in contention for the Liga BBVA title.

It was an important victory for Real Madrid CF against Real Sociedad de Fútbol (0-4) on matchday 32, keeping their hopes alive in the exciting contest for the Liga BBVA, while Real finish the day in sixth, staying in the UEFA Europa League zone.

Real Sociedad and Real Madrid went face-to-face with much at stake. The clash started with intensity and with Carlos Veila putting Diego López to the test, the goalkeeper reacted well to a close-range shot from the Mexican in the 3rd minute. The response came from Gareth Bale in the 18th, though he was unable to finish a counter-attack because of a timely intervention from Iñigo Martínez. Antoinne Griezmann and Karim Benzema also had chances to open the scoring, but it was Asier Illarramendi, in the final minute of the first half, who got on the end of a rebound off Claudio Bravo from a Benzema shot to put his team ahead.

The second half started with a ball that struck the Bravo’s crossbar after a header from Sergio Ramos. Real Madrid broke the first-half deadlock and started to dominate the chances on goal. After another shot that hit the crossbar from Benzema, Bale got on the end of a ball from a Claudio Bravo goal kick and scored Madrid’s second goal with his left foot. Pepe and Álvaro Morata closed the scoring with goals in the final moments of the match.