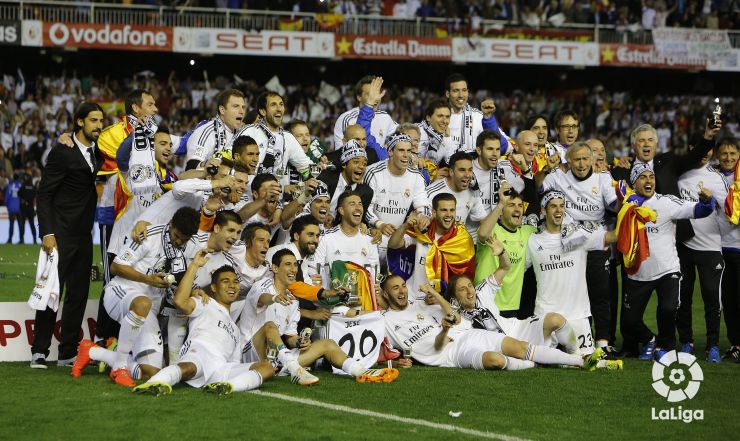 Goals from Di María and Gareth Bale gave Madrid the title despite an equaliser from Marc Bartra.

Real Madrid were crowned champions of the Copa del Rey after beating FC Barcelona 2-1 in the Estadio de Mestalla. The result means the Whites have now won the competition nineteen times.

The side from the capital were superior early in the clash and they took the lead after just ten minutes. Karim Benzema found Ángel Di María and the Argentinian brought the ball under his spell before entering the box and beating José Manuel Pinto to score his fourth goal of the competition. As the clock ticked on the azulgranas began to dominate possession, although the Whites continued to produce threats through Gareth Bale, Benzema and Di María. Barcelona’s best chance came just before the break, but Leo Messi’s left-foot shoot was just wide of the mark.

After the restart, Bale had two good opportunities to get a second for Carlo Ancelotti’s men but his finishing was not up to scratch. The Catalan outfit also tried its luck but Iker Casillas cleared a shot from Marc Bartra who dangerously penetrated the opposition’s area. Shortly afterwards, Barça’s defender was back and, this time with his head, he found the back of the net. The equaliser cranked up the excitement in the Mestalla. In the dying minutes though, Bale got Real Madrid’s second with a stunning run that gave Real Madrid the Copa del Rey title.