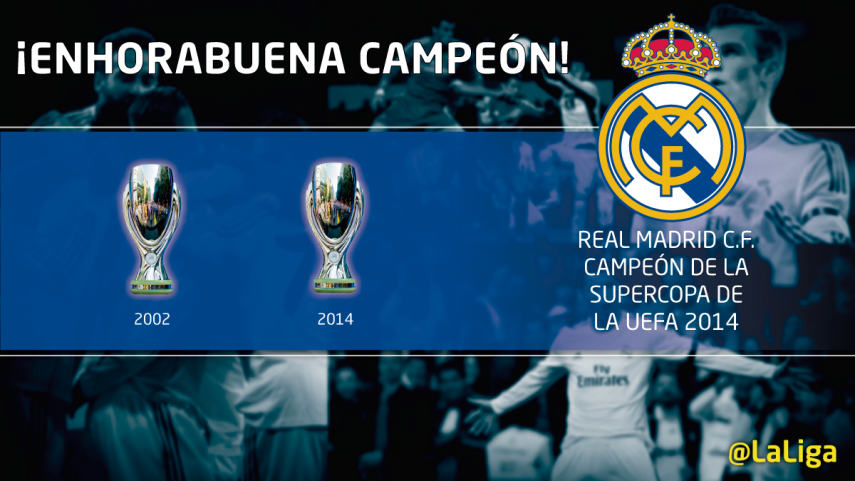 The Liga BBVA continues to dominate Europe after a passionate final between Real Madrid and Sevilla, which the Whites eventually won 2-0.

Real Madrid CF have started their 2014/15 season as they finished the previous one: lifting a European trophy and leaving Spanish football at the pinnacle of Europe. Having won the UEFA Champions League in May, the Whites have tasted glory once more by beating Sevilla FC, the champions of the UEFA Europa League, 2-0 in the Cardiff City Stadium.

Carlo Ancelotti's team put on a display of football and grit to lift the coveted UEFA Super Cup in a match in which the night's real winner was the Liga BBVA, which was represented by both of the European finalists. The result is similar to that of recent years in that eight of the last twelve champions of the competition have been Spanish teams.

Despite already having a frighteningly good squad, the arrivals of Toni Kroos (FC Bayern München), Keylor Navas (Levante UD) and James Rodríguez (AS Monaco FC) completed the team that have now won the second UEFA Super Cup in the history of the club, after winning the title in 2002 by beating Feyenoord Rotterdam 3-1.

The title will give the side from the capital the morale boost it needed to come flying out of the blocks in the new season and present themselves as strong candidates for the Liga BBVA and Champions League, the competition where they will be looking to successfully defend their title after the success of last season.