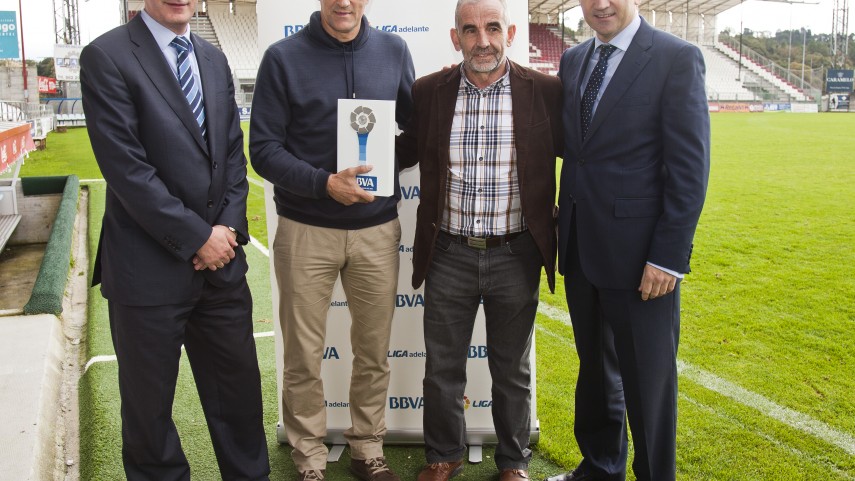 The coach from Cantabria has led Lugo to the zone that provides automatic promotion to the Liga BBVA.

Quique Setién has received the Premio BBVA for the best coach in the Liga Adelante in October. The manager from Cantabria has taken Lugo to the automatic promotion zone for the first time in its history.

"It's not an individual achievement for me, it's primarily for the players who are having an extraordinary season, and for all of the staff who work with me. It's something we all merit at this club, for how it functions, and for how well things are going", commented Setién after picking up the trophy.

He arrived at CD Lugo in 2009 and won promotion to the Liga Adelante in the 2011/12 season. From that moment, he has been exceptional for the Galician club. In his first campaign, Setién closed the season having never occupied the relegation zone and the team comfortably stayed up. This season his success has continued and he is making history with Lugo, earning himself the manager of the month award for October along the way.

Setién's results with Lugo leave little room for doubt. The team lies in second place, five points behind the leader, although their start to October was not the best (they lost to Real Madrid Castilla), the side that now prop up the table. However, the Galicians beat Córdoba CF 1-0 and rescued a valuable point on their visit to the division's leaders, RC Recreativo de Huelva. It topped off its great month with a home win over CE Sabadell FC.