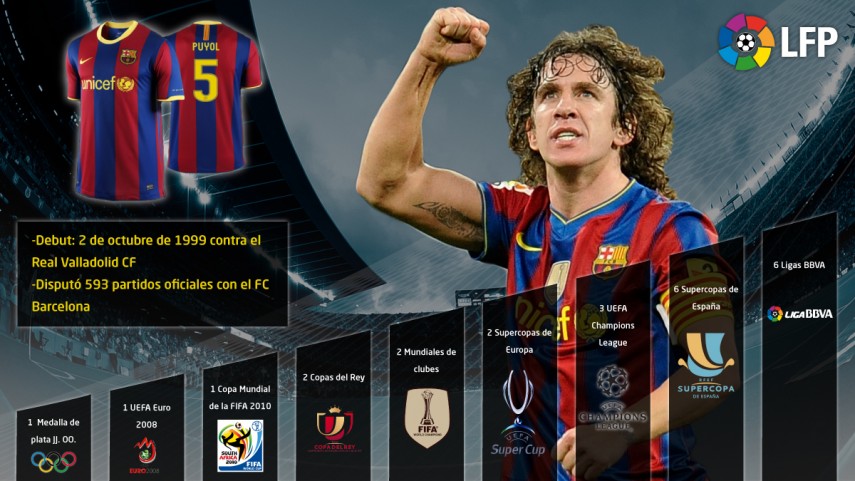 Puyol, a successful and exemplary career

The Barcelona captain calls an end to his career at the club after 19 years of service during which time he has played 593 games and won 21 titles.

Carles Puyol, FC Barcelona’s eternal captain, has announced his decision to leave the Catalan club. The living representation of everything the club stands for bids farewell to a 19-year playing career with Barça during which time his self-imposed standards and values have turned him into the leader of a group of champions.

From his beginnings in La Masia during the 1995/1996 season, Puyol quickly became the fans’ most beloved youth academy player. That bushy haired defender, who even then possessed such great power and strength, became a real warrior from the moment he made his first team debut on the 2nd of October 1999 against Real Valladolid CF. And now he will be remembered as one of the Catalan club’s all-time legends.

His versatility meant that Louis van Gaal deployed him as a full back, but his physical prowess eventually saw him move into the centre of defence as the years passed by, a position he would hold for the rest of his footballing career. His perseverance helped him towards his first ever title (during his first year as the team’s captain) during the 2004/2005 Liga BBVA campaign. But that was just the beginning of what was to come in a hugely successful sporting career.

His most successful season at club level was during the 2009 season when he won the treble: the Liga BBVA, the Champions League and the Copa del Rey. As a result, he made footballing history by being part of the first Spanish side in history to win the three biggest titles on offer in a single season, thereby joining the likes of Celtic FC, AFC Ajax, PSV Eindhoven and Manchester United FC.

As well as his glorious achievements with his club, he has also enjoyed an impeccable international career with the Spanish national side. He celebrated his 100th cap with the national team on the 6th of February 2013 against Uruguay, another accomplishment to add to his silver medal from the Olympic Games in Sydney, as well as his UEFA EURO 2008 2010 FIFA World Cup medals. An impressive list of achievements that will carry even more meaning on Thursday.

The 36-year-old, from the small town of Puebla de Segur (Lérida), has decided to end an exemplary career at the Catalan side that will live long in the memory of Barcelona and Spanish fans.