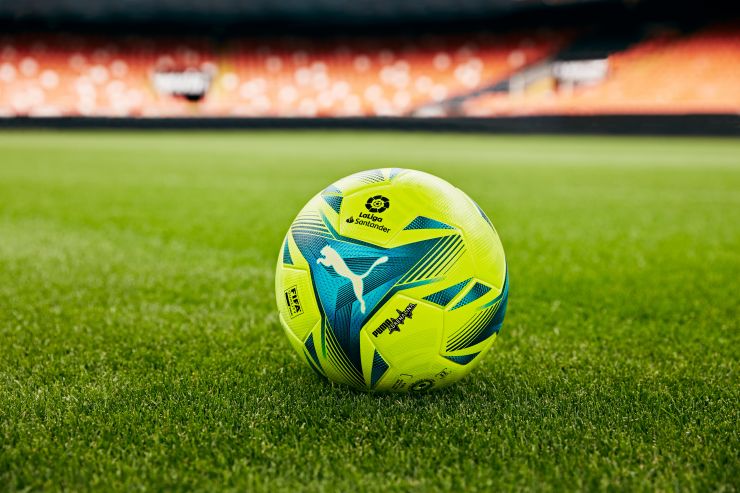 For the second season running, the Spanish competition will feature a specific ball for all special matches played in LaLiga Santander. Several PUMA players, including Luis Suárez, Jan Oblak and Antoine Griezmann star in the launch campaign.

The sports brand PUMA and LaLiga present their latest design for the ADRENALINA matchball, the second official matchball for the 2021/22 LaLiga Santander season, which will be used for special fixtures in the competition’s calendar such as ElClasico, the derbies and other standout matches.

Matchdays 10 and 29 will see the ADRENALINA matchball on display at the Camp Nou and Santiago Bernabeu stadiums respectively as FC Barcelona and Real Madrid CF face each other in ElClasico.

Following the launch of the primary ACCELERATE match football in June, with a design that drew references from the energy of FIRE, now comes ADRENALINA with its intense combination of yellow and blue colours that draw their inspiration from the powerful energy of an ELECTRIC storm. The LEMON TONIC and DARK YELLOW tones contrast strikingly with touches of LIGHT BLUE or HARBOR BLUE and DARK PUMA.

For the second consecutive season in the Spanish competition, all decisive LaLiga Santander matches will feature a specific matchball. In the 21/22 season, the ADRENALINA ball will be used in over half of the 38 rounds to be played.

The design of this football draws reference to the electrifying force of certain games considered to be decisive in the season’s outcome, that increase the heart rate of the fans and make the adrenaline flow through their veins; games that include ElClasico, the Gran Derbi, the Basque derbies plus other Barcelona, ​​Madrid, Valencia and Andalusian encounters.

The brand has called upon the services of PUMA players Luis Suárez, Jan Oblak and Antoine Griezmann to present this second official match football in a special launch campaign in keeping with the spirit that PUMA and LaLiga have wanted to convey since the outset of their collaboration: This isn’t just football, this is LaLiga. This is not just a football, this is the Heart of LaLiga.

A state-of-the-art football with best-in-class aerodynamics

ADRENALINA is a high-performance ball, approved by FIFA, with an exclusive 8-panel design, incorporating the latest technologies to achieve a state-of-the-art ball with the best aerodynamics. Its sphericity is perfect, it has been high frequency molded to guarantee reduced water absorption and maintain excellent shape retention. The 3D textural 1.2mm PU surface provides greater durability by increasing resistance to abrasion and wear and, with the addition of POE foam, sensitivity has been improved to provide a firmer touch.

The official 2021/22 LaLiga ADRENALINA football will be available from July 12 at PUMA.COM and at selected retailers worldwide.