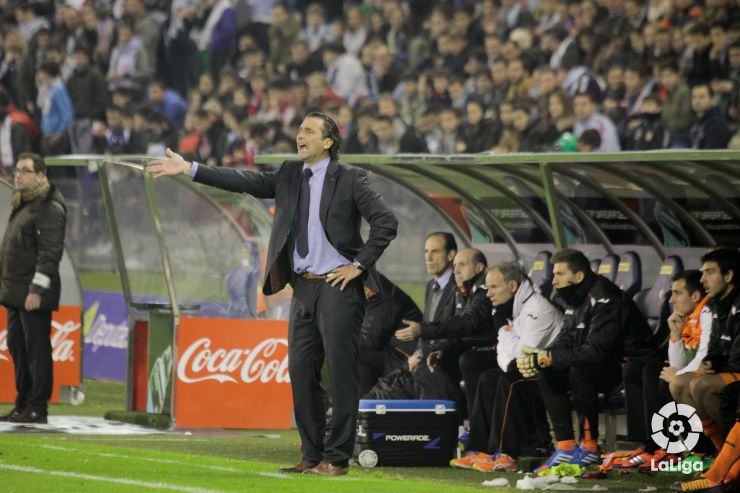 The current Che coach was a lethal goal scorer in the 1990s, when he found the back of the Camp Nou net as a Barca player and as a visitor.

Juan Antonio Pizzi will be taking charge of a very special Liga BBVA clash this Saturday at 16:00. Having recently been appointed head coach at Valencia, he is now preparing for a match against Barcelona the Camp Nou, a stadium where he showed off his goal scoring exploits for two seasons during which time he won plenty of silverware. However, he began making a name for himself long before that with CD Tenerife, where his attacking ability was for all to see, especially against Barcelona. If anyone is capable of beating the blaugrana, Pizzi is undoubtedly a worthy candidate.

The Argentine came to Spain at the beginning of the 1991/92 season and had an immediate impact, scoring 15 times in 34 Liga BBVA matches. Barcelona was his favourite opponent. On the 7th of December 1991 he came off the bench to score twice in a 5-3 thriller, which finished in favour of the Catalans. Those two goals were nothing to do with beginner's luck, as the South American would prove a few months later. In the 32nd match of the season, the no. 9 scored another brace, which this time earned the Canary Islanders a win against Johan Cruyff’s men. In total he scored four goals that season against the eventual League and European Cup winners. Not bad for a 23-year-old.

The arrival of Jorge Valdano to the dugout coupled with Pizzi’s goals resulted in an historic 1992/93 season for Tenerife. The team finished fifth in the league and Pizzi clocked up the exact same numbers as the previous campaign: 15 goals in 34 games, including a penalty against his current team, Valencia. It was his great performances during those two seasons that earned him a move to los Che, where he was unable to live up to his previous scoring records. He only managed to find the back of the net on four occasions in 19 matches, but one of those goals marked a significant event for the club. On the 9th of January 1994 Pizzi scored Valencia’s 3,000th Liga BBVA goal.

He returned to Tenerife for the 1994/95 season, where he once again found his shooting boots, scoring 15 goals again and making his debut for the Spanish national side. That was just a prelude for what was to come in the 1995/96 season, when he became a truly lethal finisher. Under Jupp Heynckes' instructions, Tenerife finished fifth once again and Pizzi ended the season as the league’s top scorer, with 31 goals. His instinct in front of goal was too much for opposition defences and he scored three times against Valencia and once more against Barcelona, who after conceding so many times at the hands of the striker, decided to sign him.

He acted more as a second striker with the Catalans, but his goals still proved important for the team, especially in the Copa del Rey. Pizzi scored a vital goal against Atlético Madrid in one of the most dramatic matches in the history of the competition (5-4 in the Camp Nou) and also forced extra time in the final against Real Betis, a match Barcelona went on to win in the last minute. That was just one of six titles Pizzi won with Barcelona. He also lifted a Liga BBVA title as well as a UEFA Cup Winners' Cup.

He moved back to his native Argentina for the 1998/99 season as his playing career began to wind down. He hung up his boots while with Villarreal, where he scored one goal in 13 appearances. In total he scored 92 times in 221 Liga BBVA matches and was one of the deadliest finishers in the Spanish topflight during the 90s.

If Valencia needs any inspiration ahead of Saturday's clash against Barcelona, they don't have to search too far to find it.