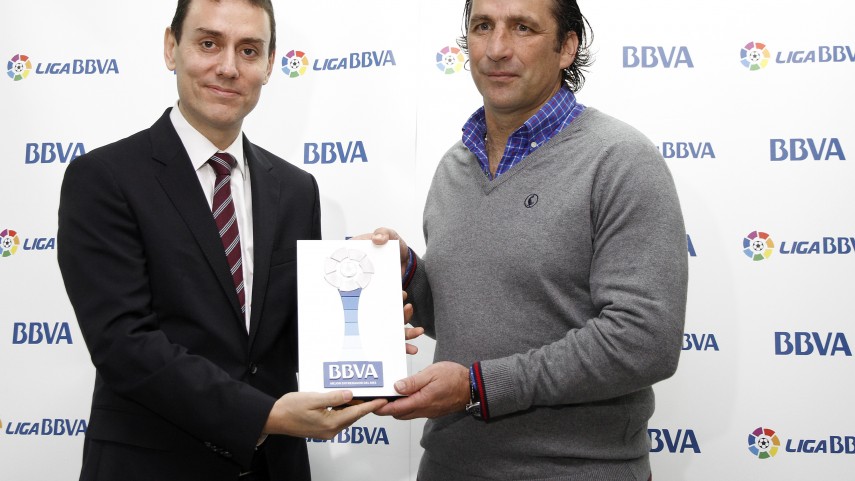 Pizzi is named the best Liga BBVA manager for February

Valencia’s Argentine manager is awarded the prize this month thanks to his side picking up ten points from a possible twelve.

Juan Antonio Pizzi, the Valencia manager, has been bestowed with the Liga BBVA manager of the month award for February, an honour handed out by the official sponsor of the Liga de Fútbol Profesional.

Valencia's performances under Juan Antonio Pizzi have been close to perfection. Three wins and a draw, resulting in nine points from a possible twelve, have allowed Pizzi's men to move to eighth in the table with 35 points. El Che closed out the last 30 days of Liga BBVA action in flying form.

Pizzi expressed his gratitude for the recognition, saying that receiving the award for the best Liga BBVA manager in February "is a compliment". In addition, he thanked his players for their hard work: "They are the main reason, the ones who are really responsible for our progress and for receiving this kind of award".

Pizzi's side got the month off to a fantastic start. A valiant 2-3 victory in the Camp Nou was the start of a four-match unbeaten streak for Valencia. The three points against the Barcelona were followed up with another three after a goal fest against Real Betis in Mestalla (5-0).

A 0-0 draw against Sevilla in the Ramón Sánchez-Pizjuán was the only 'blip' in an otherwise flawless month for the coach from Santa Fe. Valencia closed out February with a hard fought 2-1 victory against Granada, in one of the side’s most testing matches of the season. Defender Rubén Vezo got the winning goal in the final few minutes against the Andalusian outfit, capping off what was a sensational month for Pizzi.